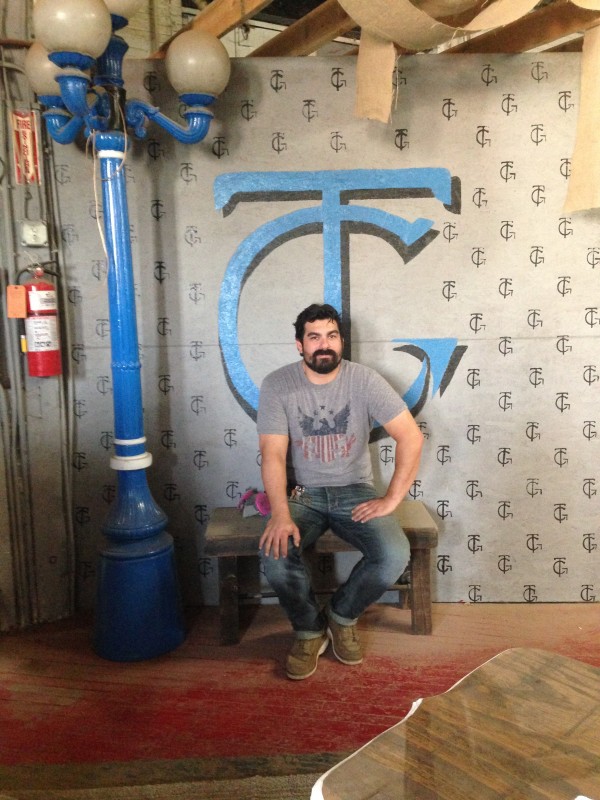 One day, out of the blue I get a phone call from John Gondevas boss man of The Hamilton Inn.

John “I have a story for you….about my friend Joe Wood” 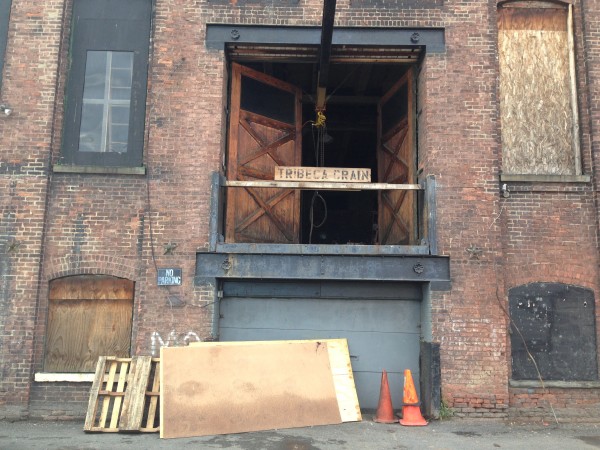 I walked in and was amazed at the space… and then I saw Joe. He is this big burly/rugged man with a beard; the typical poster child of a carpenter. I had a momentary fantasy of him picking me up and carrying me into the sunset while holding a beer and a cigarette. 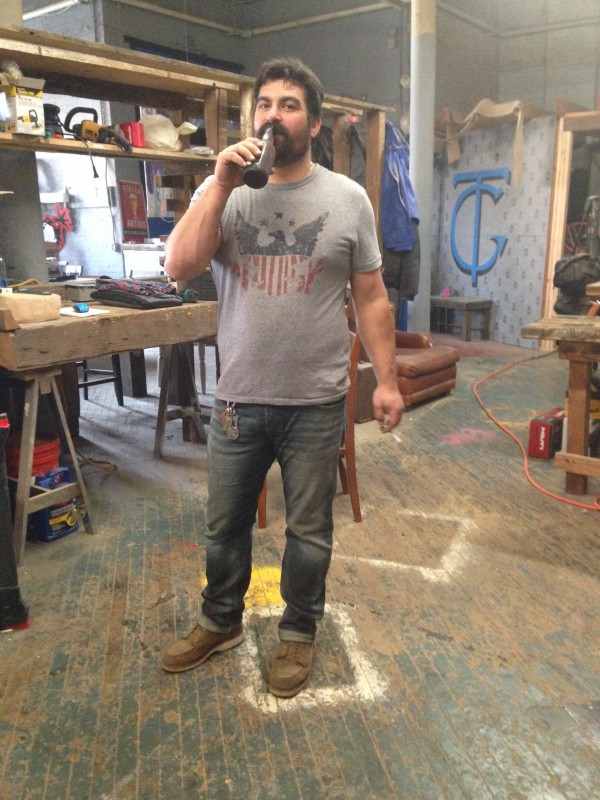 How long have you been here? We’ve been here almost 3 years.

Why is it called Tribeca Grain? All the beams that we have here, these specifically right here, are from my great grand-fathers warehouse in Tribeca. The Warehouse was on Watts St and Greenwich in Tribeca. He had a paper business in the 1900’s when he came here from Italy, he settled in Tribeca and started the paper business there, and bought a lot of buildings in Tribeca. We took 1000 beams out of a building that came down. And started making furniture out of it. 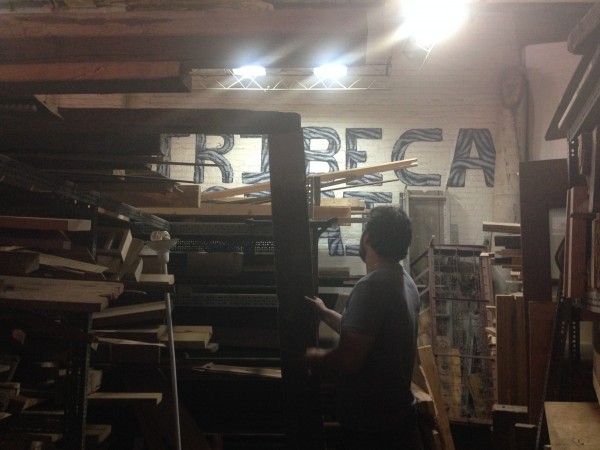 What do you specialize in? Reclaimed wood obviously, bar and restaurant stuff has become what we do regularly. This was the first table I made. These are all the beams we took out of there. 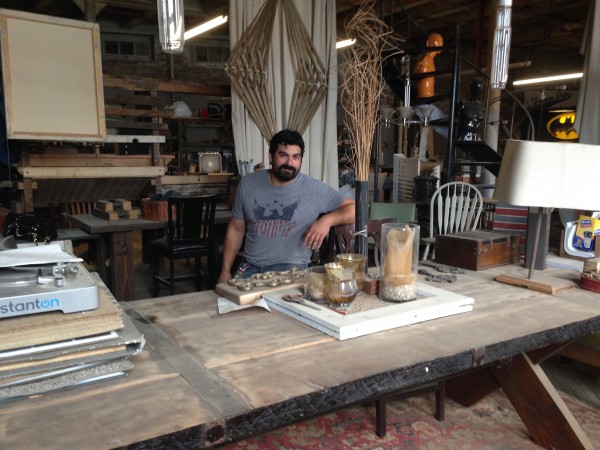 What restaurants have you done in Jersey City? I’ve done stuff for Battello, The Hamilton Inn was my first JC client, did stuff at White Star, Monty’s which is on Newark it’s not open yet though.

Do you guys do stuff for private clients? Yes we do. We’ve done quite a bit of residential stuff, anywhere from wall paneling, to desks, tables… But mostly bar/restaurant work.

What were you doing before? Mortgage fraud research. 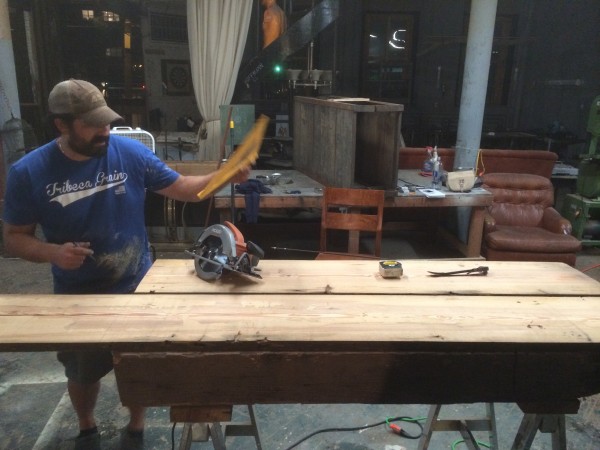 WOW. What made you decide to start your business? We found the wood. My cousins and I had to start scrapping the building and there was a ton of wood up for the taking and I suggested making furniture and my cousins were down so…

Were you always into making furniture? I had wood shop in highschool, so I have basic knowledge, and I just always enjoyed being handy and creative and building stuff.

How is it going from corporate to this? t’s amazing! I’ve never been an office kind of guy. I had a mortgage company for 5/6 years, and 2007 crushed us, that was the next best thing was doing the fraud research of all the people who got crushed in 2007, but it wasn’t something I wanted to do forever. So we found the wood, and this facility is my families, they built the recycling center, and my uncle recommended I use the space to build. 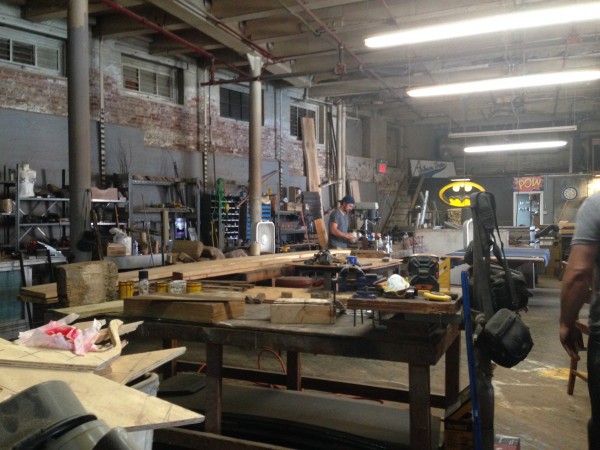 I love that you went from corporate to creative!!! I mean I don’t meet many people in offices who are like, I love my job, I love coming and sitting at a desk, opening spreadsheets. But there’s a lot to say for the foundation of the workforce and the diligence, like making a spreadsheet or keeping a schedule, that experience of the corporate world is good. 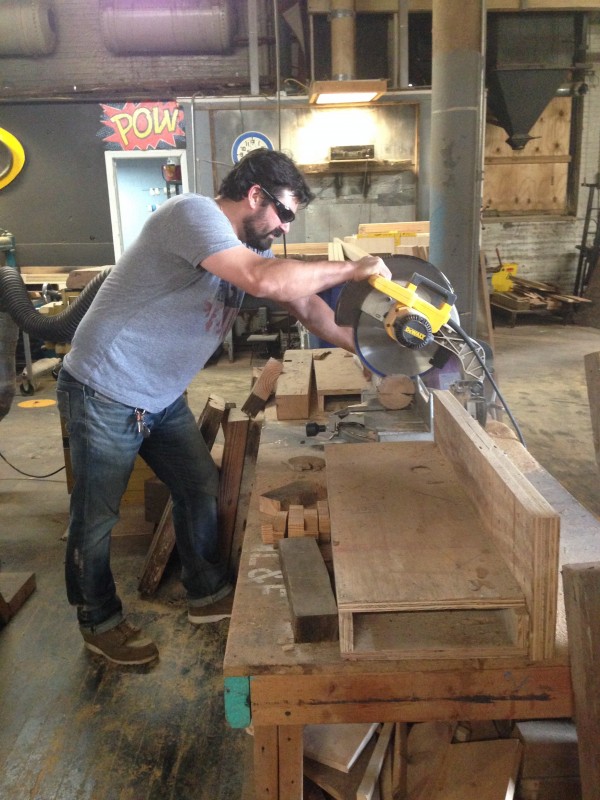 So what brought your family to Jersey City? They’ve been here since 1955. I live in the heights now been here for 7 years.

Any bars or anything cool in the heights? There’s the Trolley bar, that’s cool…Mod Cup is the newest place I’ve tried out… Just waiting for more development to happen in the heights. 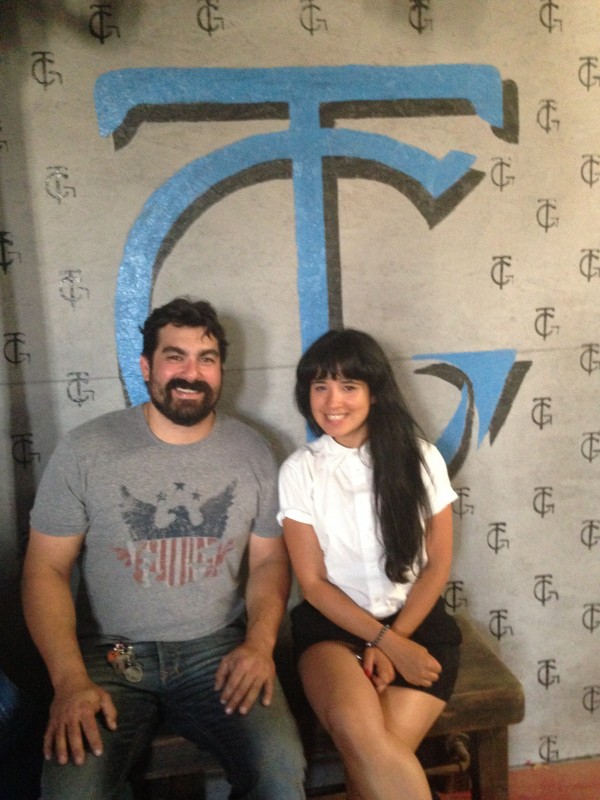 How many people do you have working here? So right now just Jackie and Kevin full-time. Jackie is an artist, she paints and did the logo, she lives in Jersey City. She’s done some really awesome work! Most of her stuff she uses nail polish actually, it’s so cool! Kevin he does custom work with me, and designs with me. It’s usually just us 3, but if we get jammed I may call other people in to help out. 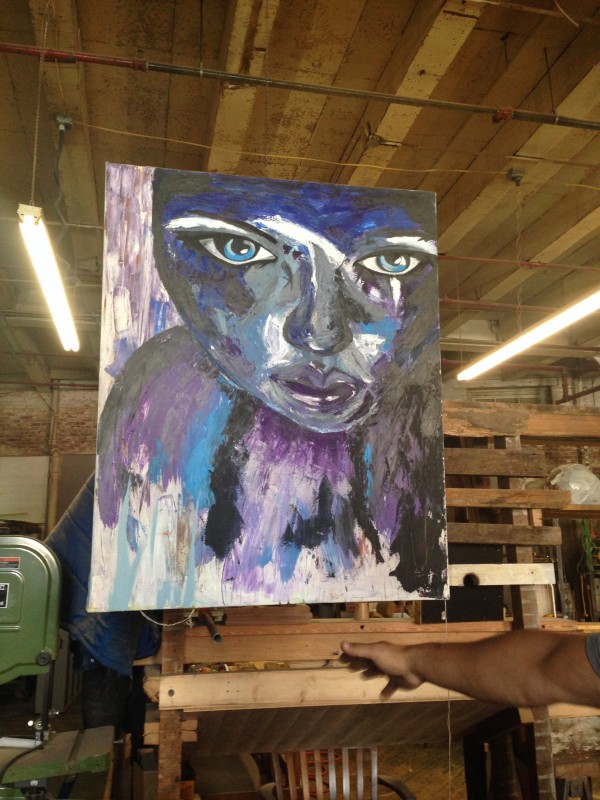 So your girlfriend, she does similar work? Yeah, she’s an interior designer.

How’d you guys meet? We met in school when we were in 7th grade. We were like 12/13 years old, dated for a while…Broke up. Dated after high school. Broke up. In between, she got married and had a kid, got divorced. Then we started dating again. Broke up. And now were on our 5th or 6th run. 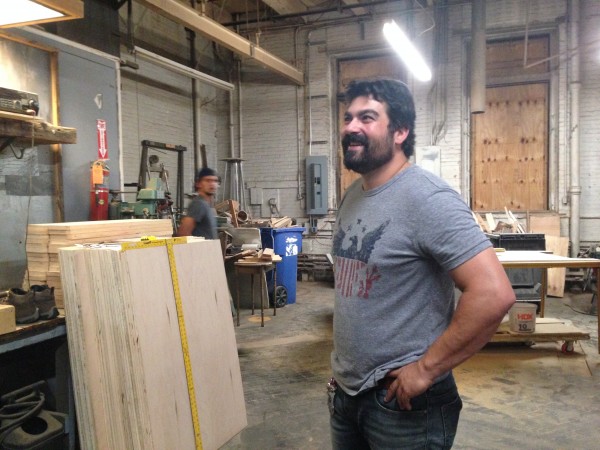 6th times a charm! We’re both busy now but its been 20 years in the making.

Are you gonna put a ring on her? I told her she’s gotta do it, we’ve done everything backwards so why not.