No matter what size of dog you own, you needn’t look any further for your canine’s exercising needs than the massive dog runs (yes, plural!) in Hamilton Park. Located on the east side of Hamilton Park in downtown Jersey City, there’s always plenty going on in and around these parks to keep you and your BFF entertained for hours. 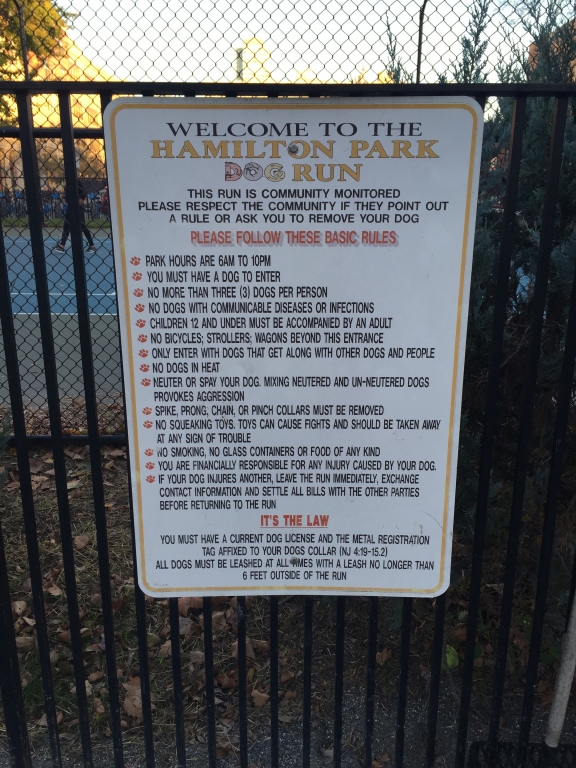 The runs are split into two completely separate areas—one for large dogs, and one for smaller pooches weighing 23 lbs. or less when full-grown. I’ve noticed that owners who bring their dogs to the Hamilton Park runs tend to adhere more to the posted size regulations than other dog parks that I’ve been in, which I think is a good thing. Even the most well-intentioned large dogs can accidentally step on a pint-sized pup, so the fact that the runs are so completely divided and have separate entrances (there’s a sidewalk in between) is definitely a good thing. The entrance areas of both runs are also pretty sizable, which is a great help when leashing and un-leashing your dog when traveling in and out. 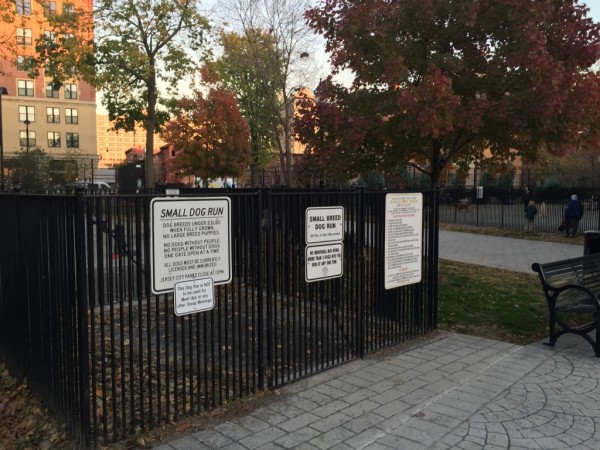 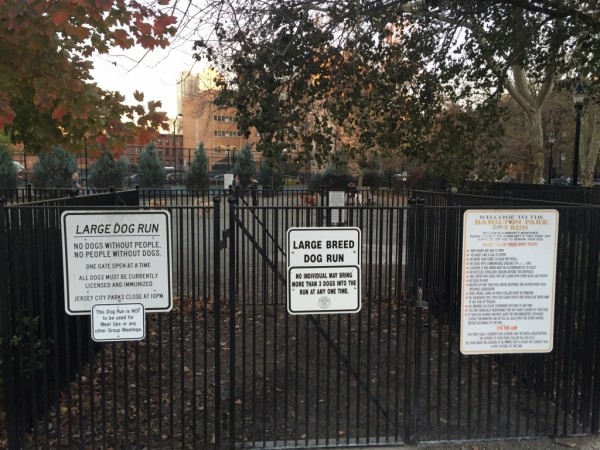 I spend most of my time in the large-dog run at Hamilton, but I’ve got to say that neither side skimps when it comes to room to roam. These parks are huge. Living in a city with a dog can sometimes get tough; I know that when I get home after a long day of work, the thought of going for a run with Benny makes me just want to take a nap. Walks are great, but sometimes they just won’t cut it for high-energy dogs. The dog runs at Hamilton Park are big enough to allow dogs to get up to top speed when chasing each other around, which is a huge help in keeping your city-dwelling pup(s) happy and healthy. 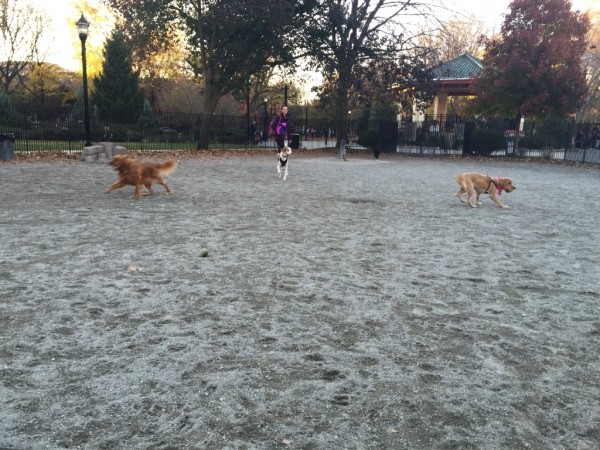 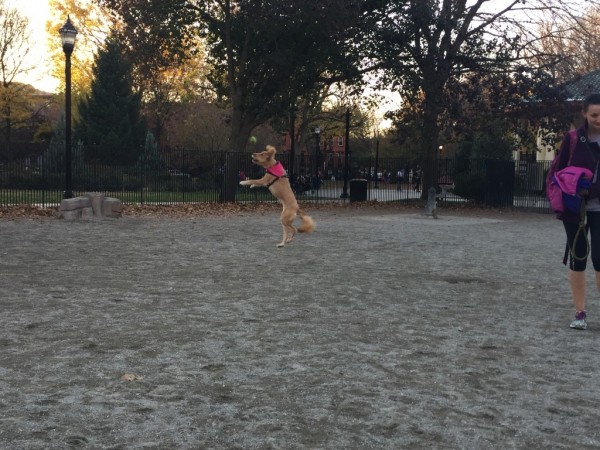 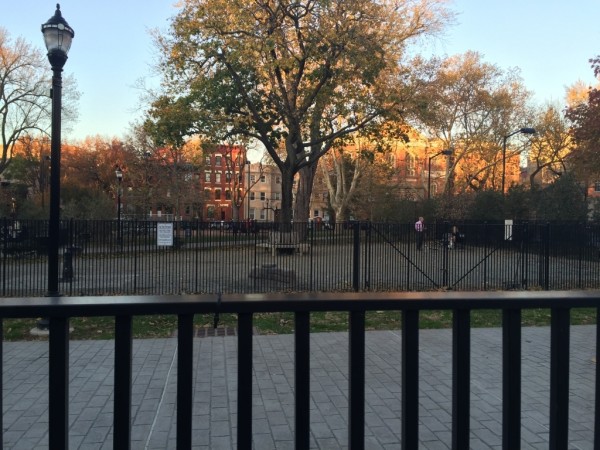 Amenities of both runs include standard conveniences like benches, poop bags, garbage pails, and shovels. However, they also have piles of fake rocks around the parks for your dog’s leg-lifting pleasure, which definitely go to good use! 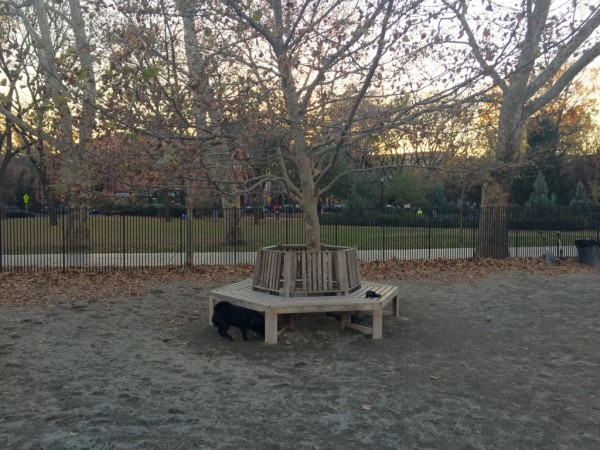 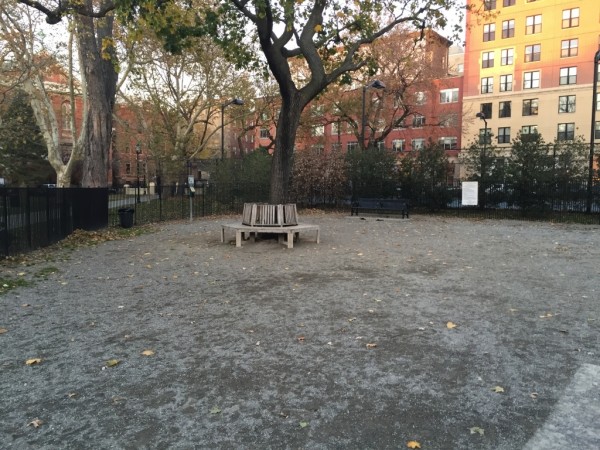 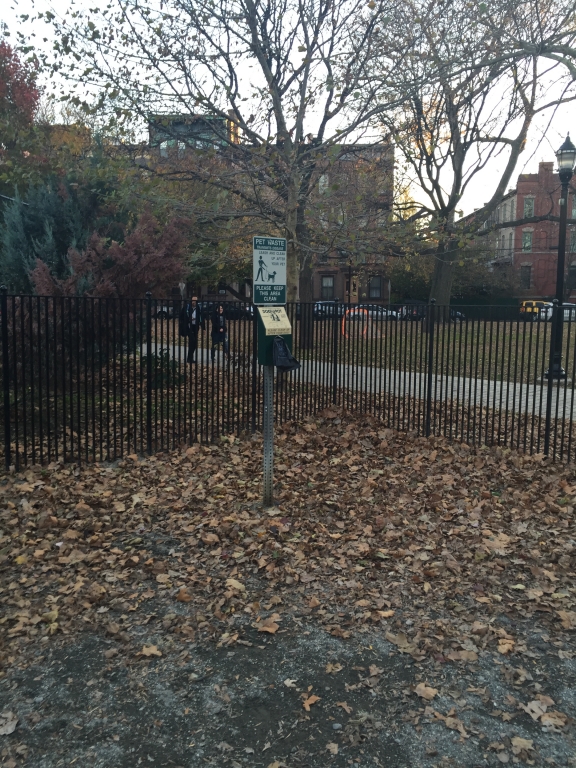 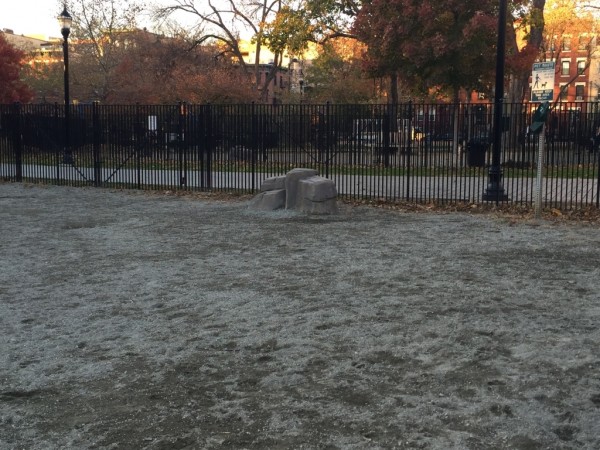 Most dog parks have some sort of water fountains installed, but the ones in the Hamilton Park runs are especially accommodating for dogs of all heights. You might think that all dogs use the ground-level faucets here, but don’t be tempted to use the human-height ones yourself! I’ve seen plenty of adventurous four-legged visitors show off their skills by using (and drooling in) the taller basins.

One of my favorite things about these runs is the great visibility that they offer. If you’re a dog lover but not owner, this is the place for you! Both parks are surrounded by sidewalks on three sides, and the gates around the runs have the perfect-sized gaps for watching dogs play from outside. Pretty much everyone who walks through Hamilton Park can’t help but stop to check out the fun—and sometimes get checked out themselves! 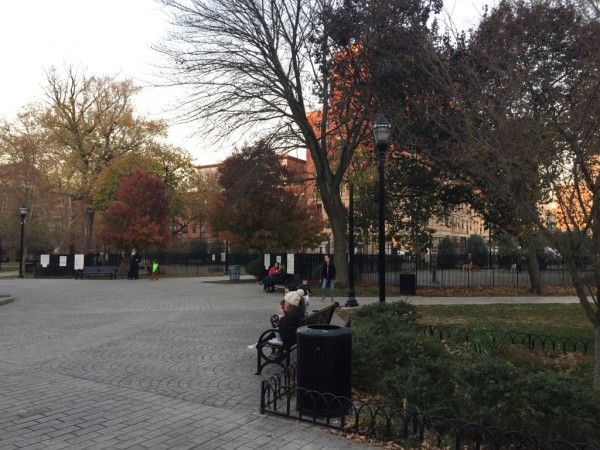 I’ve never had a bad experience in these runs, and I can’t say enough about how much fun we’ve had here!

Erin Rafferty is a Jersey City resident, originally from Long Island, New York. She loves to play soccer, ski, and read anything she can get her hands on. She’s a huge hockey fan - let’s go Rangers!

She has a 3-year-old corgi / lab mix named Benny, and loves to hang with him at Morris Canal Park. She loves meeting new people, so if you see her on the street, please say "Hello!"