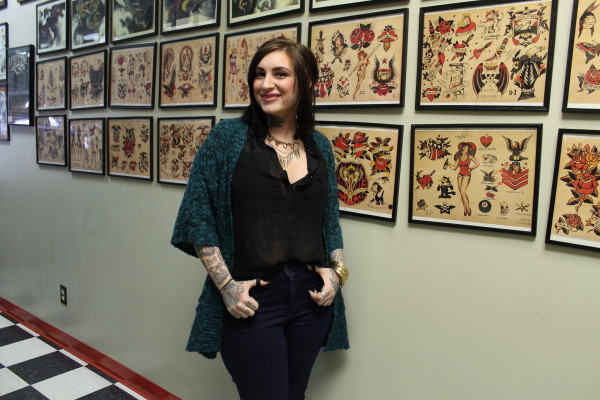 Jess, aka Zoey Ramone, is a tattoo artist at Jersey City Tattoo and has tattooed some of the most stylish JC people; menswear fashion blogger Denny who also works at Another Man’s Treasure, Carla owner of Balance Salon (post coming soon), Kari my stylish peep and “girl crush and so many more… Jess is the ultimate babe, she is like a cross between Kat Von D and Betty Page and such a sweetheart. I was really excited when she agreed to be my stylish peep!

I met Jess at the shop to interview her and she let me hang out while she tattooed Walter; one of her best customers who apparently comes in so often he basically covers her rent! Not going to lie, even though I just got two new pieces done, as I was watching Walter get tattooed, I was really jealous. I want a unicorn with a bow…. 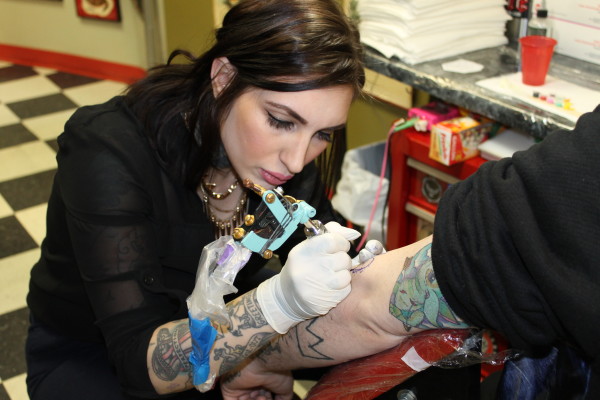 Whats your name? My name is Jessica Dwyer. In life…. But on the internet I’m Zoe Ramone.

Why Zoey Ramone? I don’t even know… I hated my last name, it’s my ex-husbands last name technically, I never changed it back, so I thought Ramone and then I was like I just want to change my name, cause I always wanted to be Zoey, or Chloe…

What do you do? I’m a tattooer at JC Tattoo. 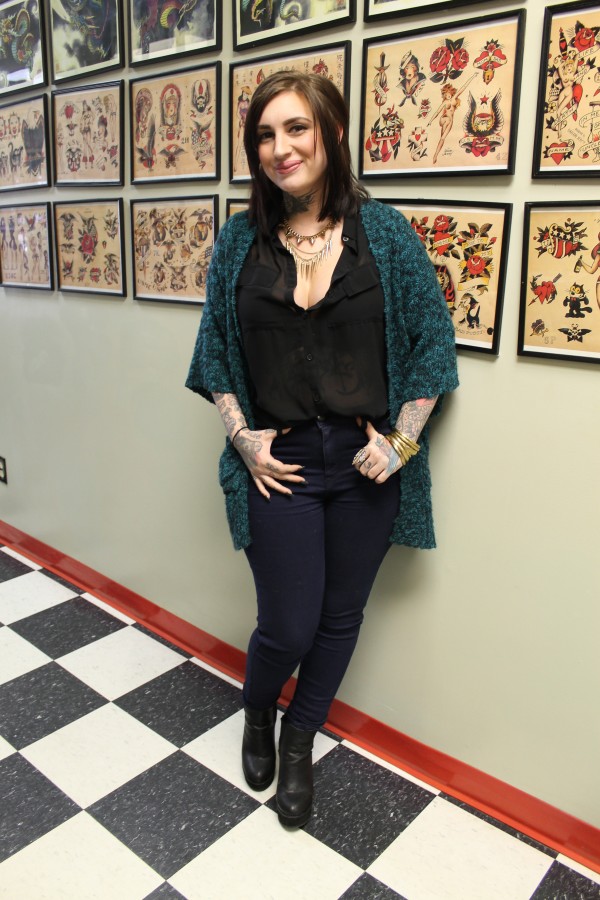 How did you get into it? I just always wanted to do it, when I was a little kid I would play tattoo parlor and draw on my friends, and then get in trouble for it. I didnt think it was really something that could happen, then I was bartending and knew a lot of tattooers, and then started asking around if any shops needed help. I got a job working at a shop in Brooklyn like at the counter and cleaning and stuff, and then it progressed from there and I began apprenticing.

Who was the first person that let you tattoo them? ME. 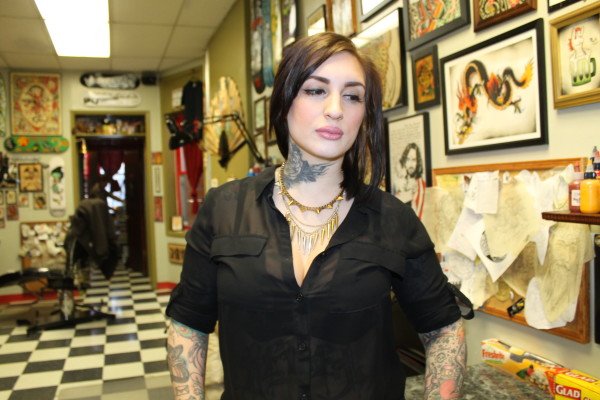 You tattooed yourself!? Yea – I practiced on myself, then this tattooer Annie Lloyd who I worked with at Three Kings, that was the first tattoo I did on someone else.

What was it? It was a sailor jerry design of a little fox.

You make me want to get crazy tattoos haha– how would you define your style? what are your favorite things to tattoo? I’m really into doing girly things right now – Like kind of traditional with a little twist, I love doing cartoons and stuff, unicorns, I love that kinda crap. 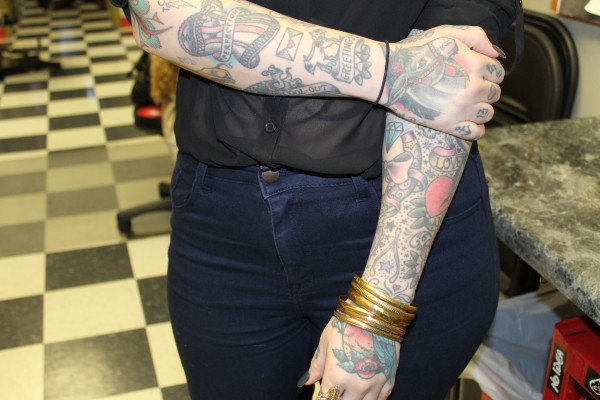 Carla (from Balance Salon) was showing me her unicorns you did … Yea I did unicorns on her, a bow, Cinderella, and some little things….

What was your first tattoo? Theres a little fairy in the CD booklet of Britney’s Oops I did it again Album, and I got that… 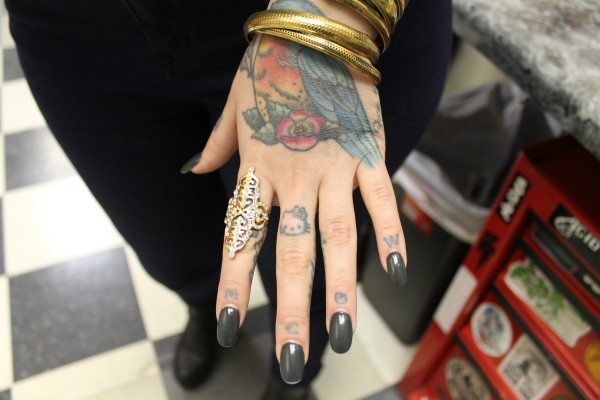 No way – where? On my hip… I was 18 and broke… walked in and said what can I get for $40 cause that was the minimum back then, and then something small….

How many do you have? I honestly don’t know, I haven’t counted, I have everything but my chest tattooed.

Your legs even? My legs… I even have 4 on my face, I tattooed this birthmark and I have a star and a heart here too, they’re white. 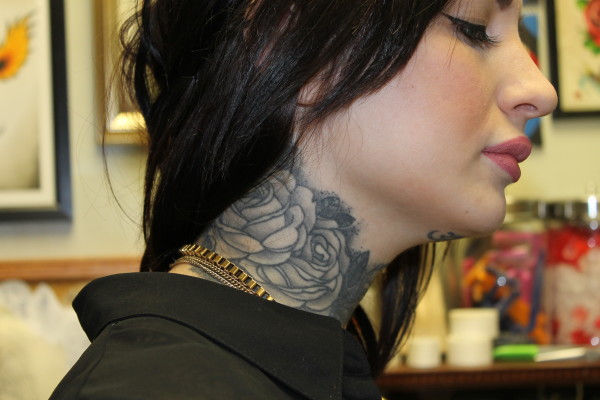 Wasn’t that painful!? Not really, my ribcage and my palms were definitely the worst…

My finger was the worst it was painful, I was going to fill it with red and then I was like I would rather give birth again then finish this tattoo.. Yea every time I go to do something new, I go into it and them I’m like fuck I forget how much this sucks, why am I doing this to myself? And then you forget about it.

Yea I actually like getting tattooed a little bit, it’s like a rush. I used to… Now I just hate the pain, I can only sit 20 min tops… 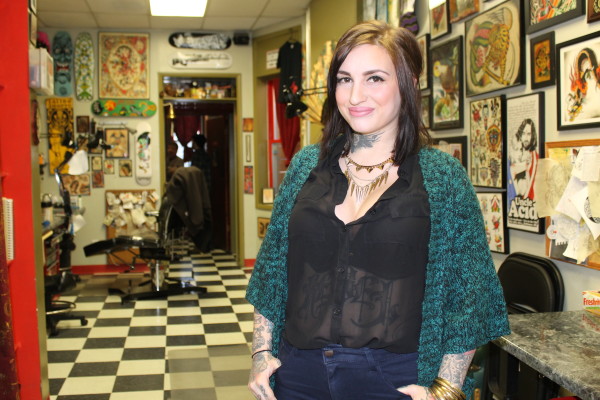 Who does your tattoos now? All different people… I’ve kind of run out of room though… and I have so many ideas but I just don’t really have the space, so I kind of have to figure out… Alex McWat and John Sultana, cause I worked with them they did a lot of them. But I have no room left, its kind of crazy.

What did your parents say? They’re over it now, they used to not be into it at all… they were kind of bummed for a while but it is what it is… my mom actually let me give her her first one.

She has only 1? Yea a little tiny white heart on the back of her neck.

That’s cute. Yea – but they don’t like them really…

What’re you wearing? My glasses are Oliver Peoples, jacket is Vintage, bag is Louis Vuitton, my flannel is Mossimo, the rest is forever 21. I’m obsessed. 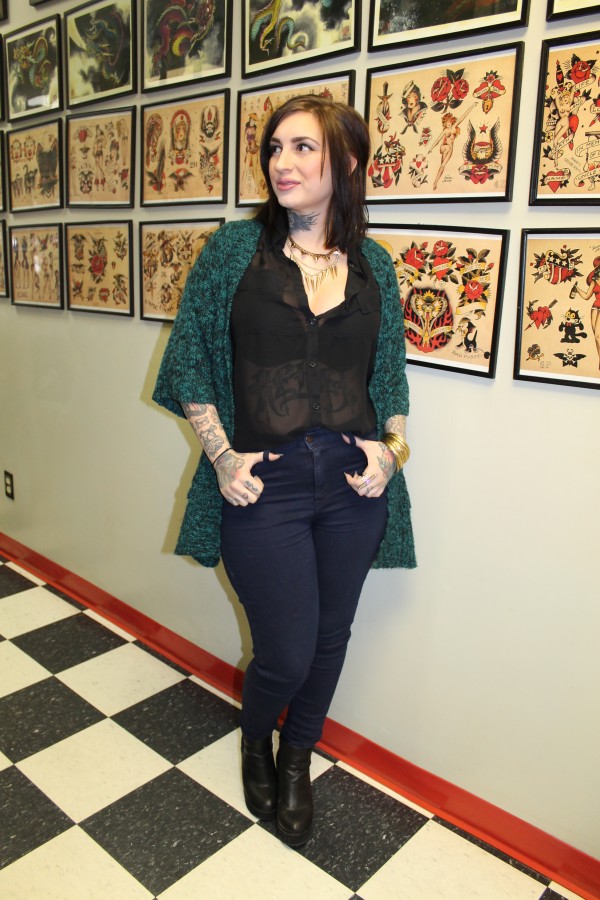 How long have you been in Jersey City? I’ve been here a little over 5 years.

Where are you from originally? New York… I didn’t want to come to Jersey… I came kicking and screaming, I moved here for an ex… and I loved JC so much so I just stayed.

Where’s your favorite hang out spot? I’m at Barcade a lot, and I pick up shifts there too – its like my family – im at luckys a lot…. My favorite place for a chill is Third and Vine… I definitely miss the Merchant, it was nice and quiet, no one really bothered you. 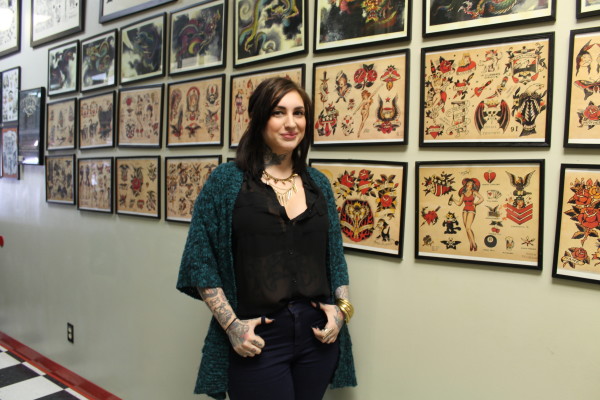 Everyone is loving Third & Vine! It’s awesome, its not crowded its chill, you can get a super well made cocktail, and its just like the owners are so sweet and its super neighborhood-ie.

So tell me about your DJing side….You guys are called? DJ Whore Kit

Why DJ Whore Kit? So it comes from this long winded idea that me and Anatalie were going to make and sell whore kits. It would be a kit so that when you’re sleeping with a dude, you have everything. Like a tooth brush, mints for the morning, a condom, a wipe… and cute packaging. We never got around to actually doing it, but we started DJing (using the term loosely) and we were just like We’re DJ WHORE KIT and we just play like fun music…

What kind? Anything from Taylor Swift to like Blackstreet… dancing music. We say think of your 8th grade dance, and that’s the music. 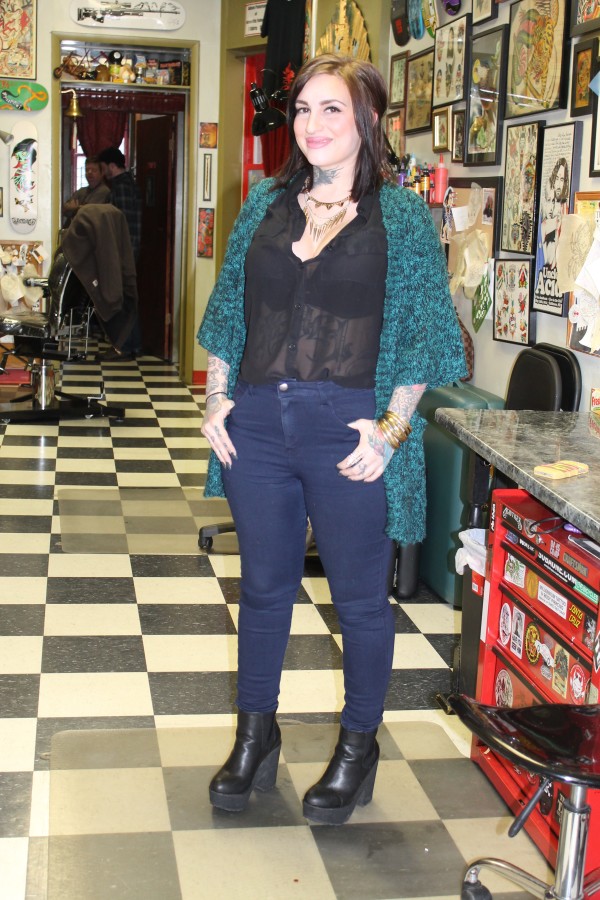 People dance?! Oh yea – its really fun, it depends on the mood. So if we’re doing Sunday nights it’s a little chiller but other nights its super dancy.

I love that!!! At Luckys right? Yea – I love it there, I go there all the time, and I used to work there as well, but like Jersey City is changing so much now…

How do you feel its changed? You used to walk in (Luckys) and know every body, and now you’ll know a couple, there’s a lot of younger kids… im 30… so like there’s a newer crowd coming in, people are leaving too. Then you still have your old regulars….

Tell me about Walters tattoos…. Walter I met as a walk in one day. He had been a client of the shops before. He kept coming in for little ones and we hit it off. We’re into the same ransom stuff. I keep a sketchbook of designs I want to tattoo and he started regularly coming in and getting them done. We come up with really fun ideas together since we are into the same bizarro stuff. We did a really fun homage tattoo for the show “Friends”—(which Courteney Cox liked on Twitter!)…. The tattoo we were working on when you were in was another TV show reference; we did candy hearts with the word “SANASA” in them which is a little song Nicole Richie & Paris Hilton used to sing on their reality show The Simple Life. 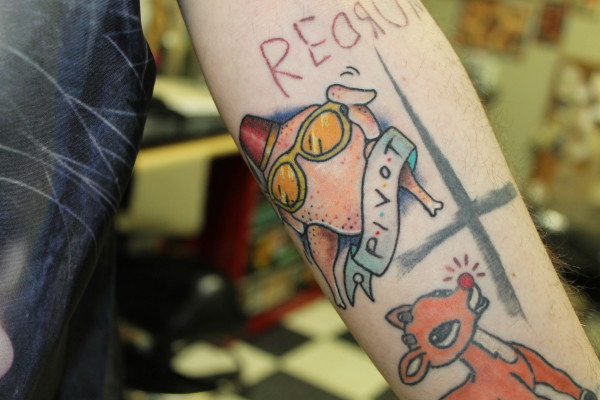 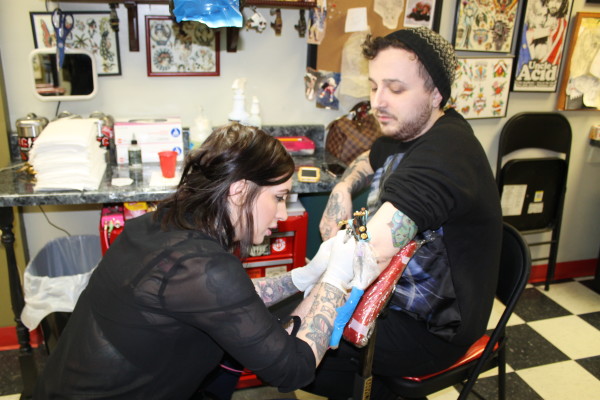 Whats the weirdest tattoo anyones asked you to do? People ask me that a lot… its so subjective though, I don’t really know, I can’t put my finger on one weird thing…I’ve tattoed some weird people… nothing stands out. I’ve done where’s waldo on someones butt, I’ve done a girls name on a dudes penis…

On a penis!?!?! It was a horrible experience. 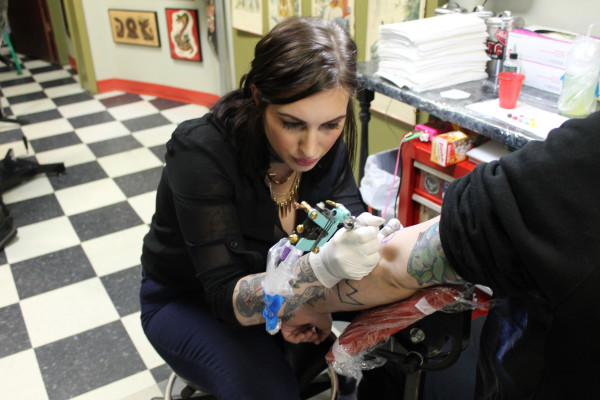 That’s so crazy… any tips you would give someone who’s getting a tattoo? I would say don’t listen to your friends over your tattoo artist, like if we think it won’t work it probably won’t. We aren’t magicians. Don’t come with an entourage, or bring little kids. Don’t be wasted. Just be open… like the daisy might not cover up the full quote youre trying to cover… don’t bring up how your friend bought a tattoo gun or machine and is tattooing people, cause it’s illegal. And dangerous like how many have contracted hepatitis from you not knowing proper protocol…

So what’s next for you? Continue tattooing obviously – get more people to get more fun things!!!