Can you guys believe it’s already been a year since we started Babes of JC?!  That’s right, an entire year of babes!  With that said, this month’s babes of JC is a little extra special because we’ll be doing a poll and would love for you guys to vote your favorite babe of JC. The winner will be receiving a prize and will be our official Babe of JC for 2018! But that will be in a separate post. For now, we’ve rounded up a pretty sweet line up so enjoy our babes of JC for December! 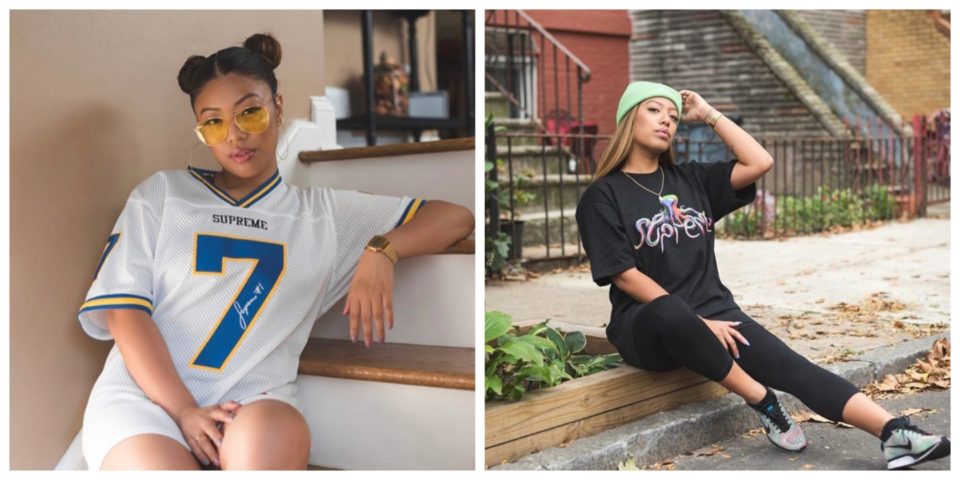 Janelle Bonilla was born and raised in Jersey City. Her nationality is Ecuadorian and Filipino. So she eats her ceviche and lumpias. She’s currently a senior at FIT NYC and will attain a Bachelor’s degree in Fashion Business Merchandising. She’s a street style enthusiast and has a love for sneakers.

1.  What do you currently do for a living and what is your dream job?

I currently work at Left Bank Burger Bar in Jersey City! They have amazing burgers, which everyone in JC should try. My dream job is really just has to involve sneakers/streetwear. I would like to be a fashion stylist, buyer, or merchant, preferably at Nike.

My favorite place to eat in Jersey City, I’ll have to say is Taqueria. To hang out, on a chill night, it’s Barcade. You can catch me playing Tetris for hours. But if I go out with my uncle and my pops, find us at Ringside. One bucket, two bucket…a bottle of Remy.

3.  How does it feel to be nominated as a JC babe?

4.  What are 3 random facts about yourself?

My first pair of Jordan’s were the citrus 7s.

The craziest thing I want to do is pack all my belongings and my sneakers, of course and move to California!

I love that my family and I were raised here. My grandfather and father bought their first houses here. My mom and dad met here. I got to grow up with my friends, from quinceañeras, high school graduations, to our first legal drink! Jersey City is going through big transformations, that may be challenging, but I’m still here prospering. 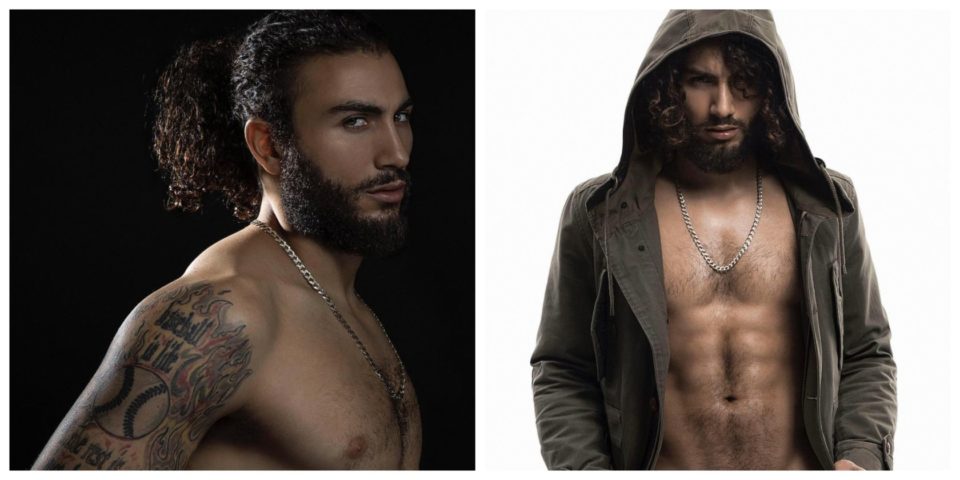 Fabian Roman is 27 years old, Puerto Rican, born and raised in Jersey City, NJ. He attended Marist High School where he was first drafted in 2009 into MLB professional baseball at the age of 17 by the Kansas City Royals! He opted out and chose to go to college in Texas, transferring over to northwestern and studying kinesiology. In 2013, he was drafted a second time into the MLB & played with the Cincinnati Reds.

In 2017 I signed with Seattle Mariners. Throughout the years, I’ve done some modeling, but my passion is in baseball. My goal is to be a role model for younger athletes to have the courage to chase their dreams no matter what adversity they might face. Fear is nothing more than a state of mind. If we choose to channel and direct that energy into what can go right opposed to what can go wrong, not even the sky is the limit. I am currently a professional baseball player. Baseball is my living and my dream job is to one day put on a yankee uniform & be able to play for the best organization in baseball history.

I don’t necessarily have a favorite place just yet but I love to venture out and try out different vegan restaurants & cafes to eat or hangout at.

It’s an honor to be nominated as a JC babe being that I was born and raised here lol. As it certainly wasn’t what I was striving for, I appreciate the acknowledgment & great vibes

3 random facts about myself are –

Craziest thing I’d like to do is do meditate & do yoga in the Himalayas lol.

What I love most about Jersey City is how much it always feels like home to me. Seeing the city grow from what it was to where it’s going is amazing. Thanks to people who continue to stay as a part of the community like Chicpea, Tarol, & their team, by keeping the culture. I’m proud to be from here and even more proud to be a living proof of success for the next generation. 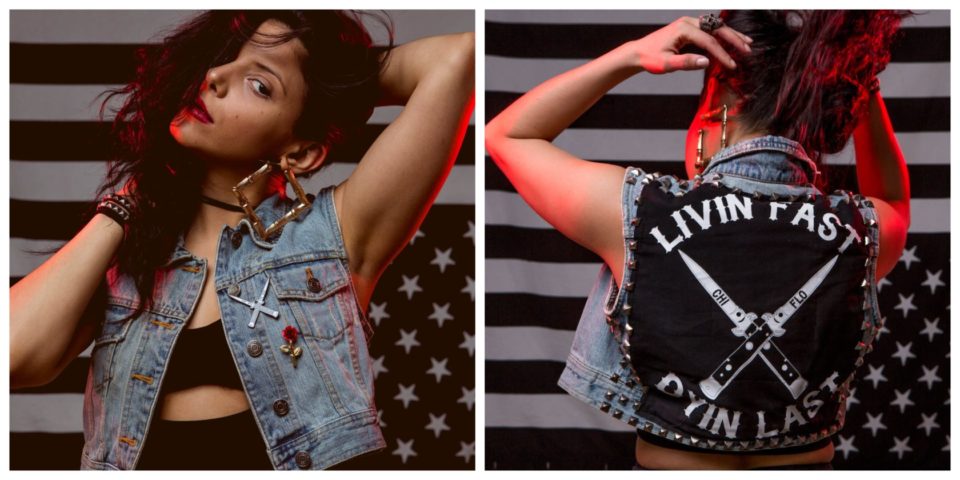 Christina goes by the nickname “Chi Flo” which doubles as the name of her Jersey City art-based, celeb-worn streetwear brand as well.

By trade, I am an artist and graphic designer and I own a clothing brand, Chi Flo. I have been lucky enough to grow my brand over the past 5 years as well as use the notoriety gained from Chi Flo to land other jobs and gigs in both local and widespread communities. Chi Flo is my main squeeze and it continues to grow as it is sold in stores on both coasts. Naturally, as most independent clothing designers with big dreams, I take on other jobs as well.  Such jobs include pop-up shops, designing apparel, posters and logos for other brands, bands, and more. I’d say I’ve finally made it to my perfect idea of brand owner and freelancer because I get to choose the jobs I take on now and am becoming recognized/appreciated by artists I look up to and always thought never knew who I was!  My dream job is to do what I am doing now but also be the frontman of a rock band. I’ve always fancied myself as a young Mick Jagger. A huge dream is to grow more and more; that is, to have Chi Flo sold in stores worldwide (i.e Tokyo!) and to maintain a steady flow of awesome fashion that is also gritty enough to remain “indie” and in-your- face. I never want to lose that.

I’ve got to go with Lucky’s! Lucky 7’s was the first bar I came to in Jersey City almost 10 years ago and it hasn’t changed over all this time. That’s pretty rock n’ roll to me. I love the bartenders as well and I always go to see my best friend DJ there, Nikki Mixx. I do love Pet Shop too. Other than that, I’m a big fan of living in The Heights to get away from the downtown hype. It’s not that I don’t appreciate downtown, it’s just I also appreciate doing my own thing behind the scenes.

UM AMAZING. Lynn has always supported Chi Flo before we had even met. I love that she remains true,  because doing what she does is amazing and also seems hard to be under the microscope so much (relatable). She is loved and appreciated but also criticized (by mostly people behind their cell phone screens it seems) – and no matter what her critics say, she still thrives and does her thing. She listens to her audience, but she’s not going to hide just because someone has some BS to say, and I truly appreciate that in a person. So what I’m saying is I’m proud to be recognized her and have her in Chi Flo because her attitude is rock ‘n roll as f*ck!

1.) I love to sing and I read music – I have major goals to be the front-man of a band
someday and often do open mics. I’ve been told I sound like Glenn Danzig had a
baby with Lana Del Rey, but uh, I’ll let the audience decide.
2.) I taught myself to graphic design other than a class in college, so yeah, never got schooled for anything I currently do for a living.
3.) I had a talent agent as a kid to be an actress but was too shy to follow through
with any of it even though it’s like, still a dream of mine to be on SNL.

5.  What is the craziest thing you’ve ever done or wanted to do?

Craziest thing I’ve ever done was give a shit about what other people think.

What I love most about Jersey City is the diversity and how close it is to New York- but is still in New Jersey. Jersey City feels just as multifaceted as I am. My friends and style range from urban to punk rock to low-key to in-your-face. Jersey City gives me all of that. I’ve always had a solid group of friends but simultaneously had many different types of people that I fit in with. I like that I can be myself here, and it’s for the most part accepted, ha! 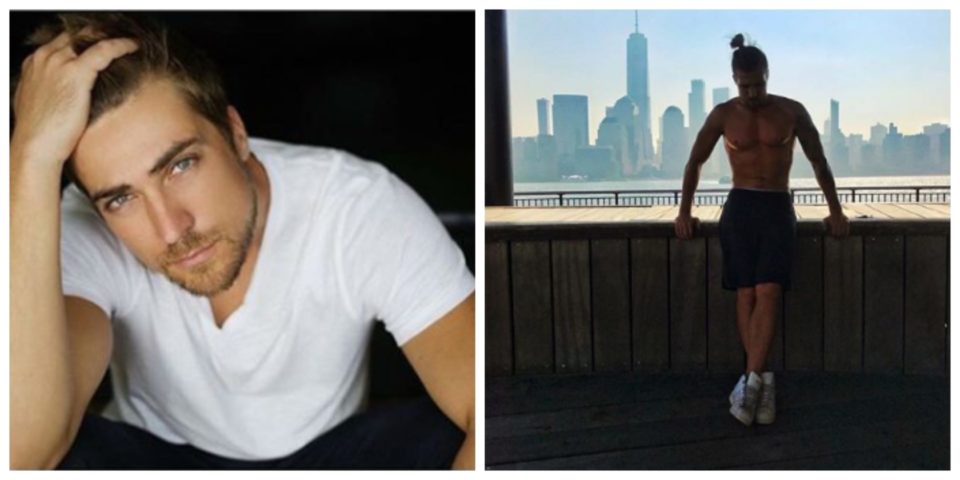 Benoit has been passionate about athletics since he was 5.  After having practiced all the disciplines of this sport, he specializes in the 110 meter hurdles and participates in many national events and becomes high level athlete.  He is a personal trainer and specializes in weight loss, physical and athletic preparation, weight gain.

I am lucky to be able to live from my job which is also my passion: acting. I am grateful to be able to do what I like being most which is an actor.  My second passion is being a personal trainer,  while in between films, I do my second job helping people feel good in their bodies and their heads.  My dream is to be directed by Sean Penn in one of these movies.

My favorite place in jersey city is 9bar cafe.

It’s a surprise, I confess. I am flattered and honored, especially because I discovered Jersey city, at a time in my life where I decided to live each moment as intently as possible, to appreciate the nature, mixed with the benevolence of the human.

It’s always difficult to talk about yourself:

My first film and first role

I climbed the steps at the Cannes festival

My first steps on the American territory, to Manhattan, the joy that it procured me and at the same time this incredible vertigo.

5.  What is the craziest thing you’ve ever done or wanted to do?

Crossing France by motorbike, discover all these regions its scents, its specialties just in two wheels, you and nature.

What I like in Jersey city is the village side, its downtown with the pedestrian street, the diversity of the population, the Pier with this amazing view of Manhattan.  Feeling calm 10 minutes from the big city of Manhattan.  The Statue of Liberty, Liberty Park, Exchange Place …

Thank you to all the babes, and stay tuned for our Babe of JC 2018!