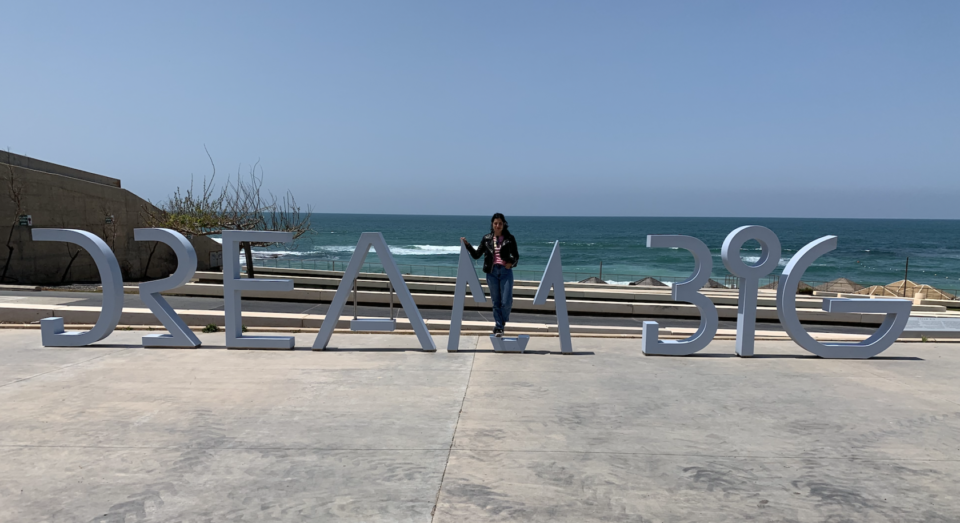 I know what you’re thinking, what does this have to do with Jersey City? It doesn’t, not really… but it’s important enough and made such an impact on me that it deserves it’s own post. If one person reads this and gets inspired by the idea behind the Peres Center For Peace, then I’ve done my job.

Let’s rewind a little… to when I was 12 years old.

I was living in Tel Aviv at the time and on November 4th, 1995 I attended a Peace Rally led by our Prime Minister at the time Itzhak Rabin. 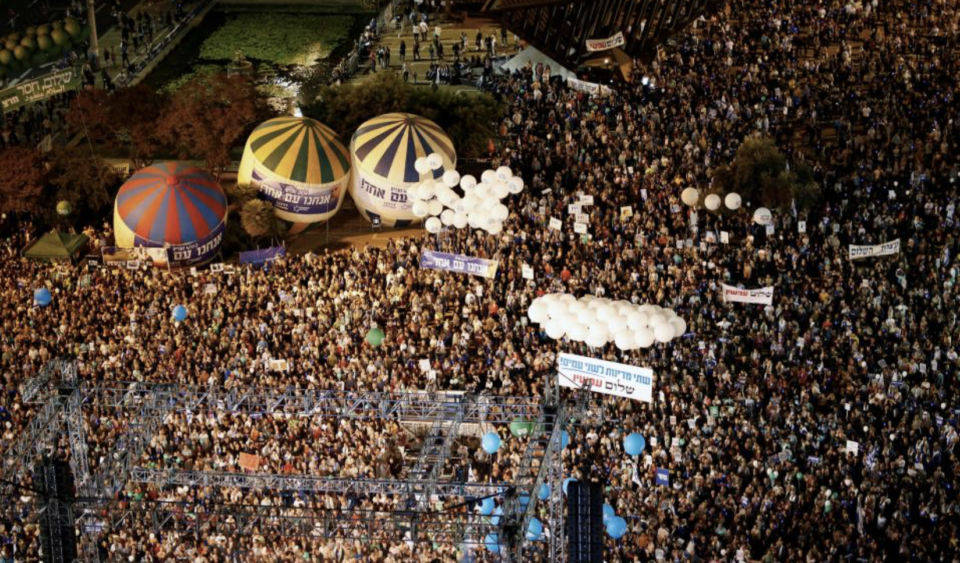 It was a beautiful rally in support of the Oslo Peace Process, an attempt to find a resolution to the Israel and Palestinian Conflict. It was the closest we’ve ever been to  “Peace in the Middle East.” I remember hearing the chanting, the crowds singing songs. It was the first time as a child I witnessed anything like this. I was on the top floor of a mall looking down when it happened. 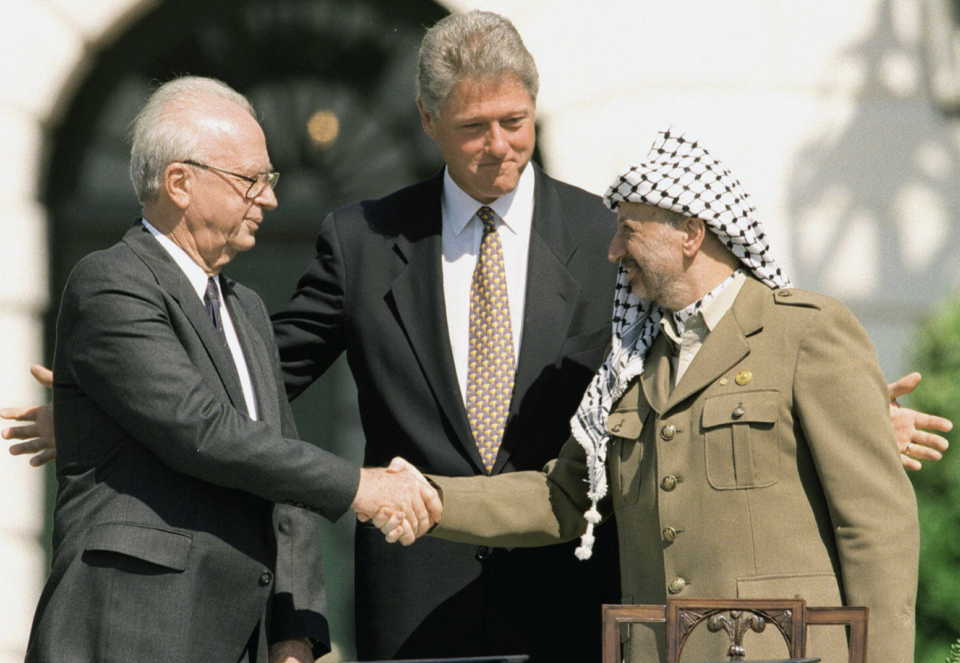 Shots were fired as our Prime Minister was walking to his car; he was surrounded by bodyguards, but the assassin got him. 3 bullets and our angel of peace was murdered by “one of us.” They later found in Rabin’s pocket a blood-stained sheet of paper with the lyrics to the well-known Israeli song “Shir La-Shalom” (song for peace).

As I write this, tears are falling down my cheek; it’s like it just happened yesterday. I remember walking home shaken. I didn’t know what to feel or how to feel. I remember crying all night, it was as if my childhood was taken away from me. Those 3 bullets took away my innocence forever. I saw the world for what it was.

The next morning, I remember walking to school and the whole city was shut down. The whole country was in mourning. Our teachers were crying and so distraught, they didn’t know what to say to us. I felt helpless. But I couldn’t just sit and do nothing, I had to get involved. 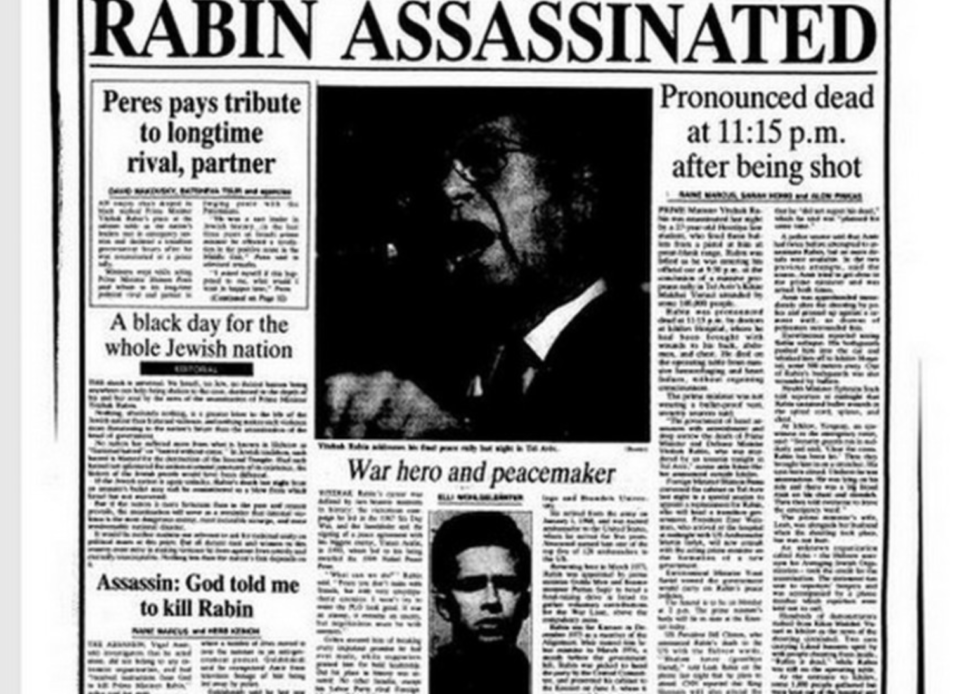 After school that week, I walked to the Labor Party outpost in my neighborhood and signed up to volunteer. I was the youngest volunteer on the team. I vowed at that time to do whatever I could to keep Rabin’s legacy going. Shimon Peres was his right hand and his predecessor, so he would be running for Prime Minister against Benjamin Netanyahu at the time.

I became obsessed with local Israeli politics, not very typical for a 12 year old but I was consumed by it. I would run every day to get the newspaper and read all the articles, I would spend hours watching the news and listening to the radio to hear what political analysts were saying. We had to win. I would give out flyers after school to motivate voters to go to the polls, and I’d wear political t-shirts with peace sayings and Rabin’s photo.

On the day of the elections, my job was to pick up seniors in taxi cabs and bring them to the polling station. I was sure we would win. I would tell myself, “The country wants peace, they want it, they will vote for it.”

Devastated. I couldn’t understand why. But it didn’t stop me. I figured, Hey, we have four years to go for this again. I continued being involved, volunteering, and putting myself out there. I was so involved that I was able to meet with a few politicians and was even invited to tour the parliament at the age of 14.

My short political career was cut short when my parents decided to move back to Canada.

My future dreams of being a politician, an activist for peace, were cut short. We moved to Montreal and I moved on with my life.

Fast forward to now – at this very moment, I live in Jersey City and interestingly enough, everything I went through at that time, everything I learned from going through that period in my childhood, made me who I am and made me good at what I do. Being able to connect with my community, being a good listener, a positive leader and resilient AF.

I visit Israel once a year to see my family, but every time I go, I always pass by the spot where Itzhak Rabin was assassinated. I light a candle and think about all the lessons this life has taught me, all the events that led me to where I am. 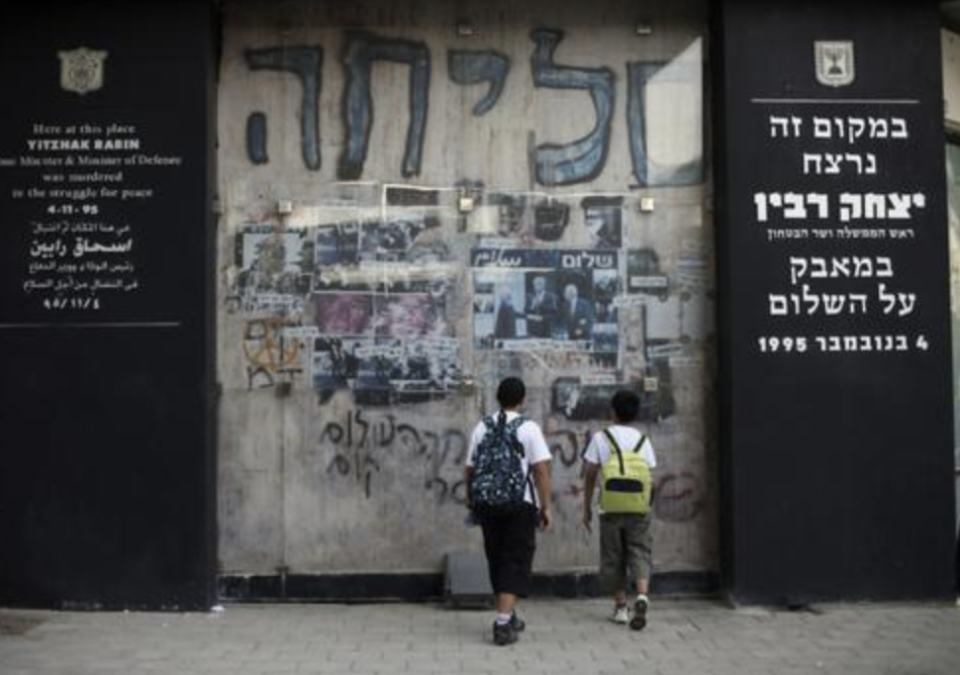 One day, my father got a call from a friend of a friend, they heard I was a “big” blogger in New Jersey and wanted to personally invite me for a private tour of The Shimon Peres Center for Peace.

It was baffling, really. It was like I was 13 again.

Although Shimon Peres lost the elections when I was a teen, he did eventually become our President, and left quite the legacy. He founded the Peres Center For Peace as a a non-profit, non-governmental, and non-political organization and died a few years shortly after, may he rest in peace.

Shimon Peres’s life mission was to promote peace and advancement in the Middle East by fostering tolerance, economic and technological development, innovation, cooperation and well-being. 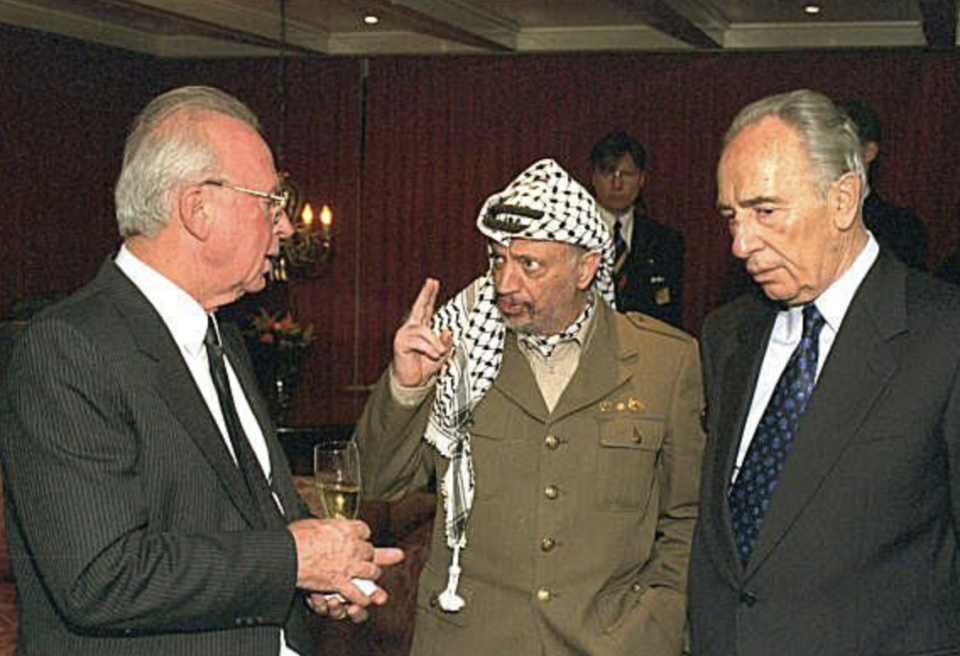 Israel is behind some of the world’s greatest innovations and inventions, and Peres made it his life mission to use that as a way to bring countries and people together. 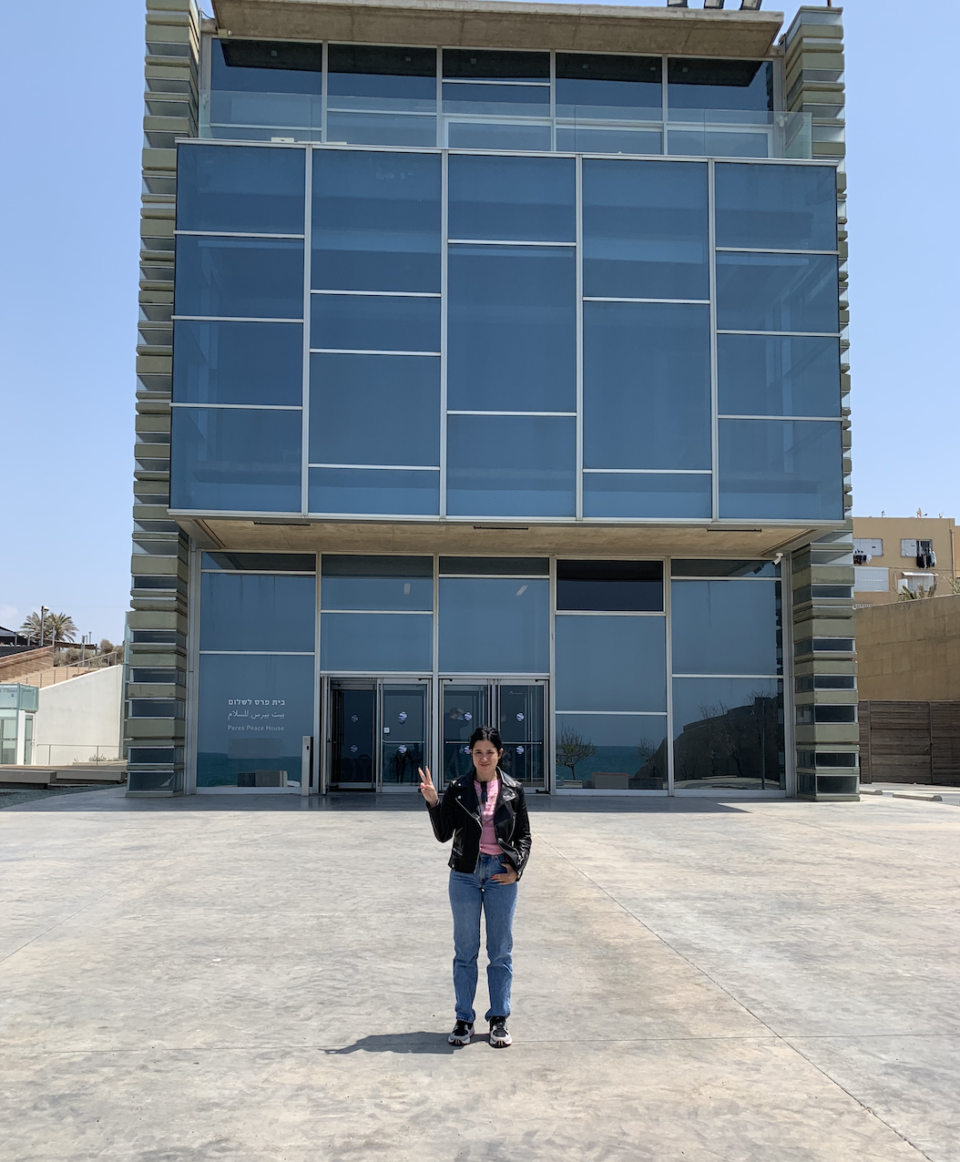 My mother joined me for the tour on a beautiful spring day and we were greeted by Yona Bartal.

Yona Bartal worked with both Itzhak Rabin and Shimon Peres. She was the President’s right hand for over 22 years and now she is the Executive Director of the Peres Circle at The Peres Center for Peace and Innovation. 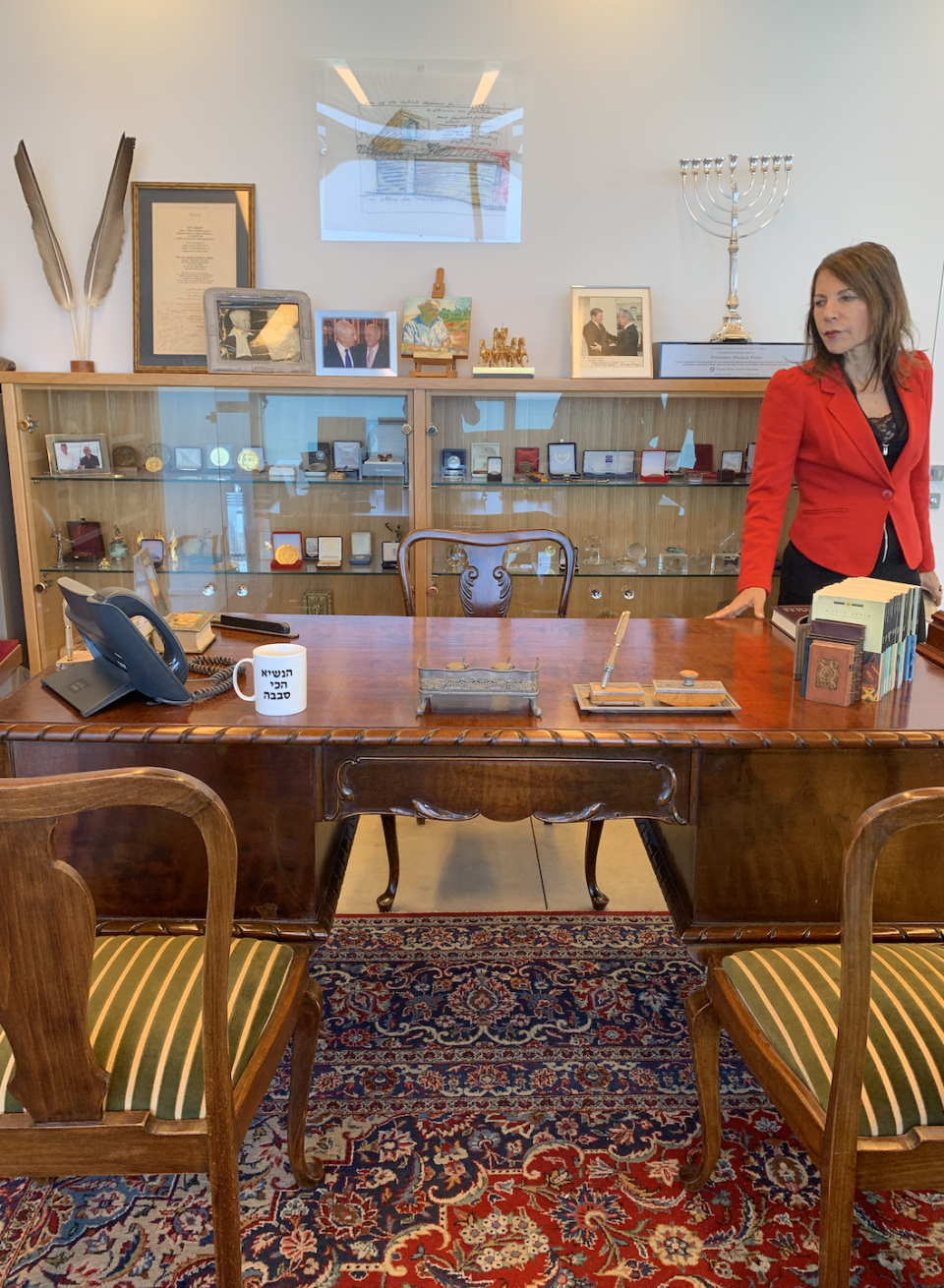 Behind every great man is an even greater woman. Things made so much sense after meeting her. 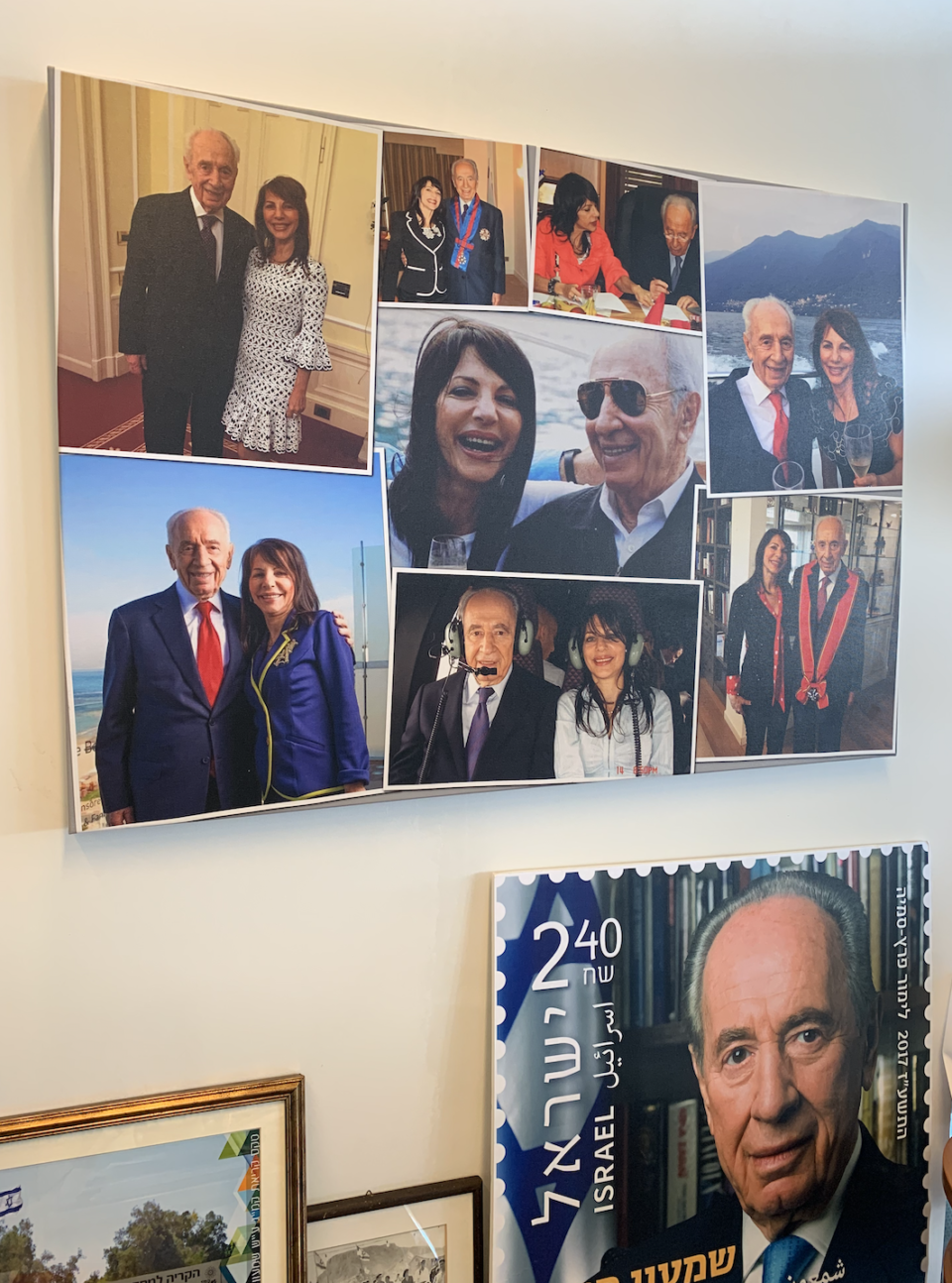 She greeted us and led us to the top floor of the innovation center. She said only special people are invited to see the President’s office such as dignitaries, politicians, big donors and I guess Jersey City bloggers?! I looked at my mother and winked.

Obama has been there, by the way… just saying.

Yona gave us a tour and told us about Peres’s work before he passed. She showed us his many medals, accolades, and prized possessions. Like the Nobel Peace Prize, and a coffee mug that says “The most awesome President.” 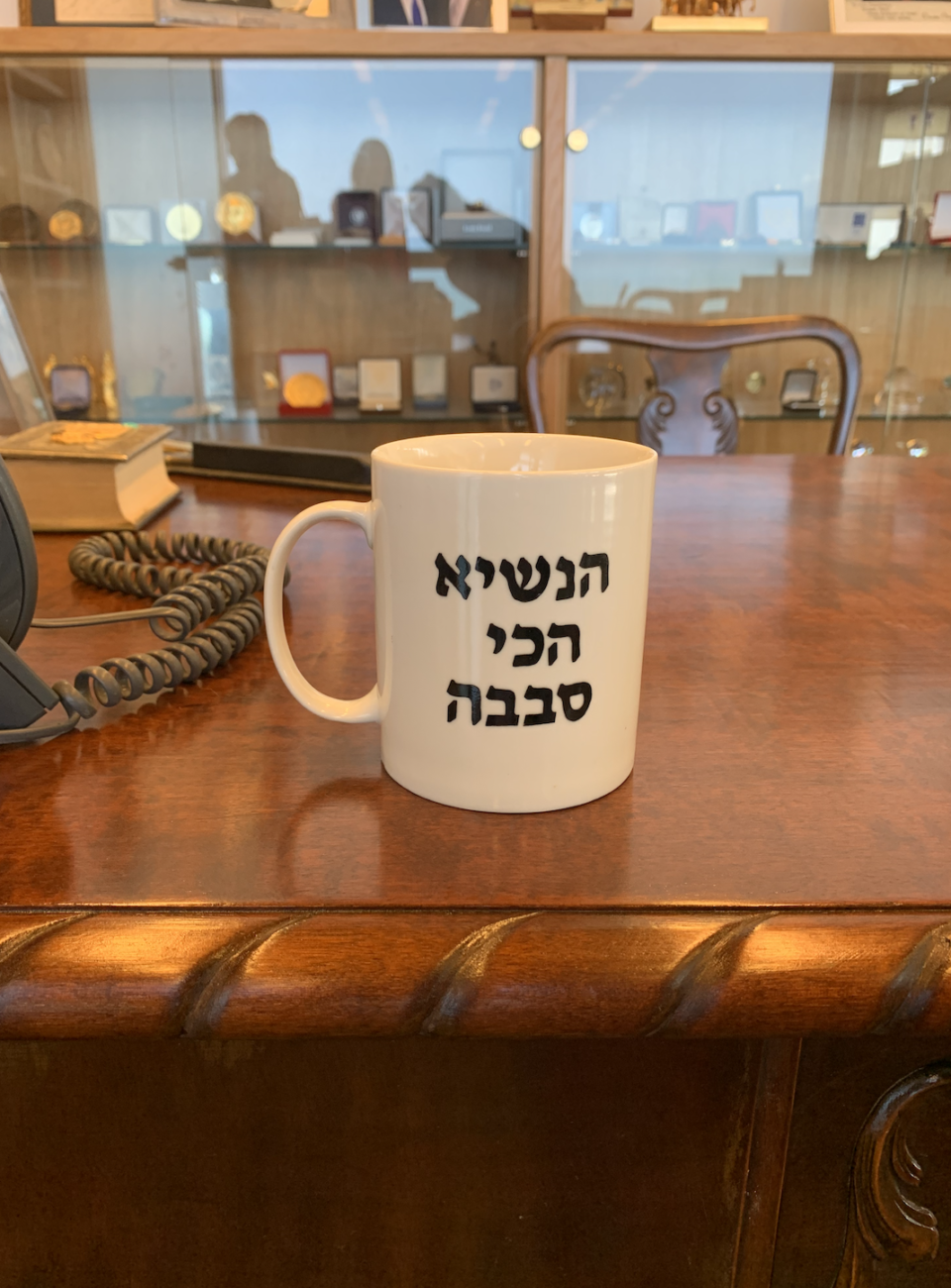 While touring the room, I could feel his energy, I could feel his positive life force around me and it was incredibly inspiring. After hanging out with Yona and hearing her story, it was time to join a group of tourists so we can tour the center with a tour guide. 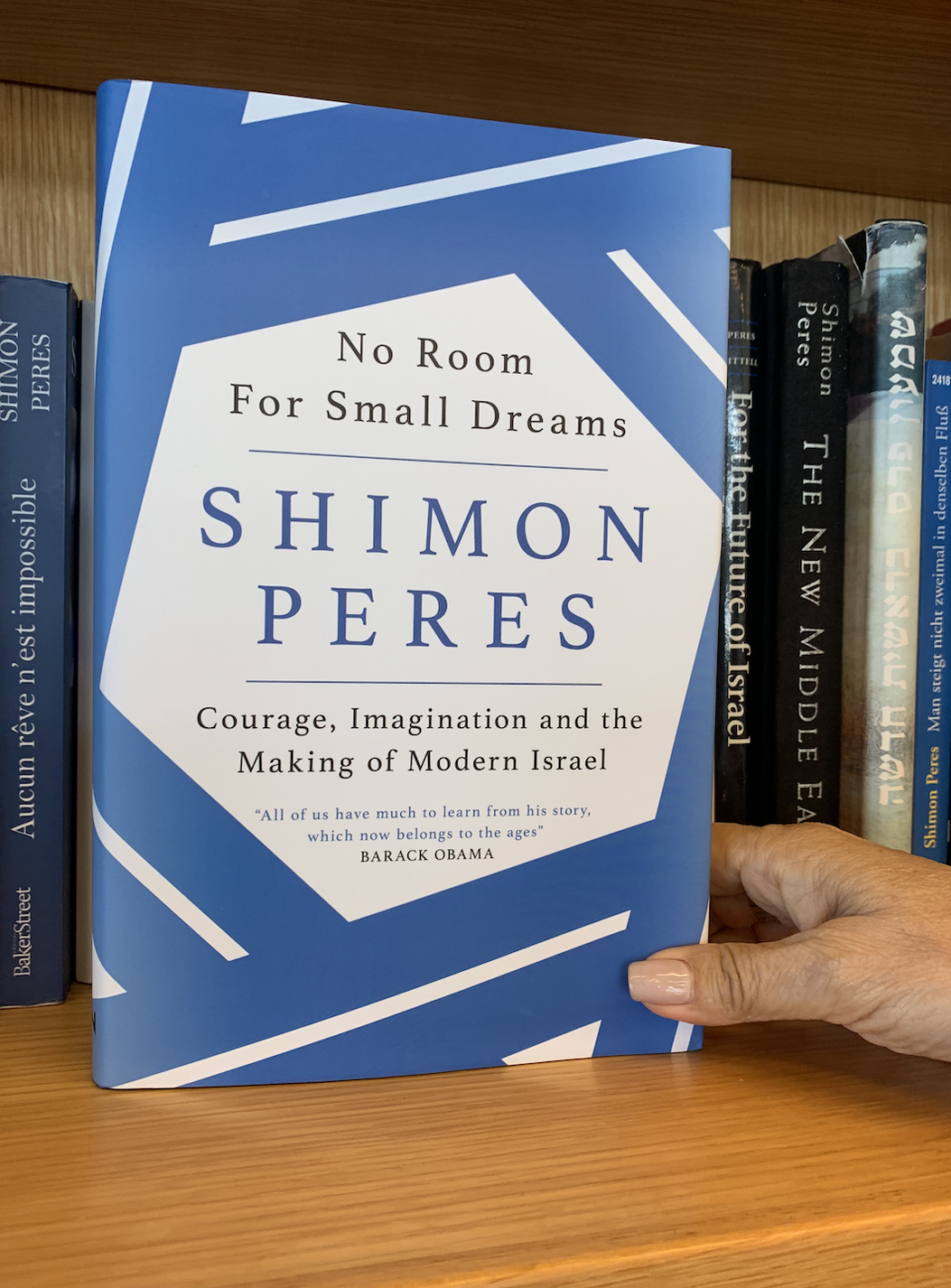 It was the most engaging, interesting, and thought-provoking tour I’ve ever done. I learned so much about innovation, entrepreneurship, technology, and the amazing things this tiny country has accomplished. 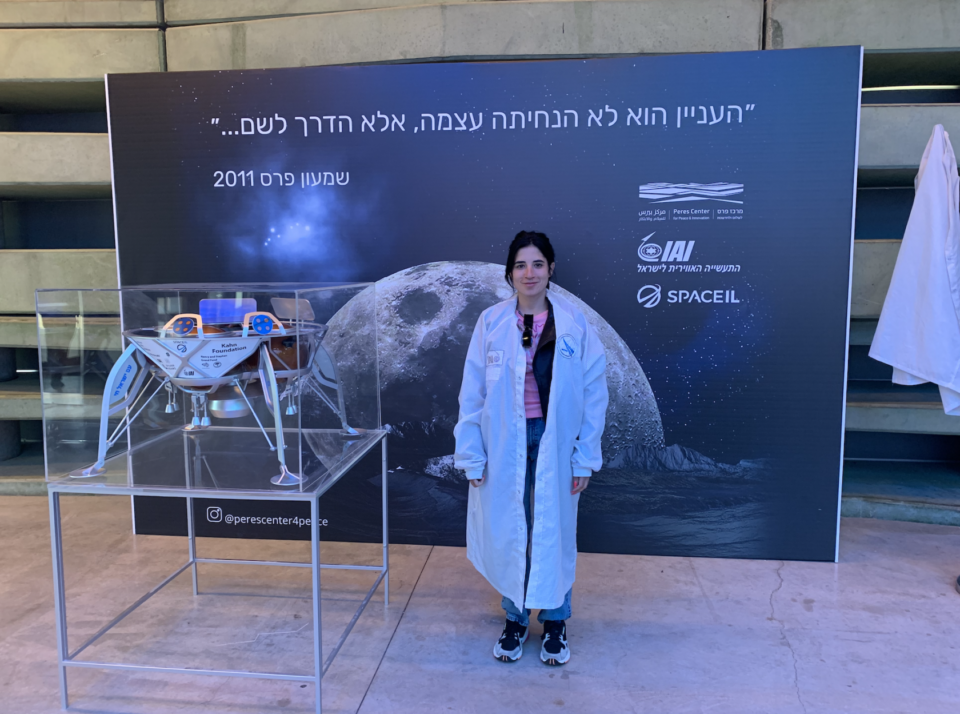 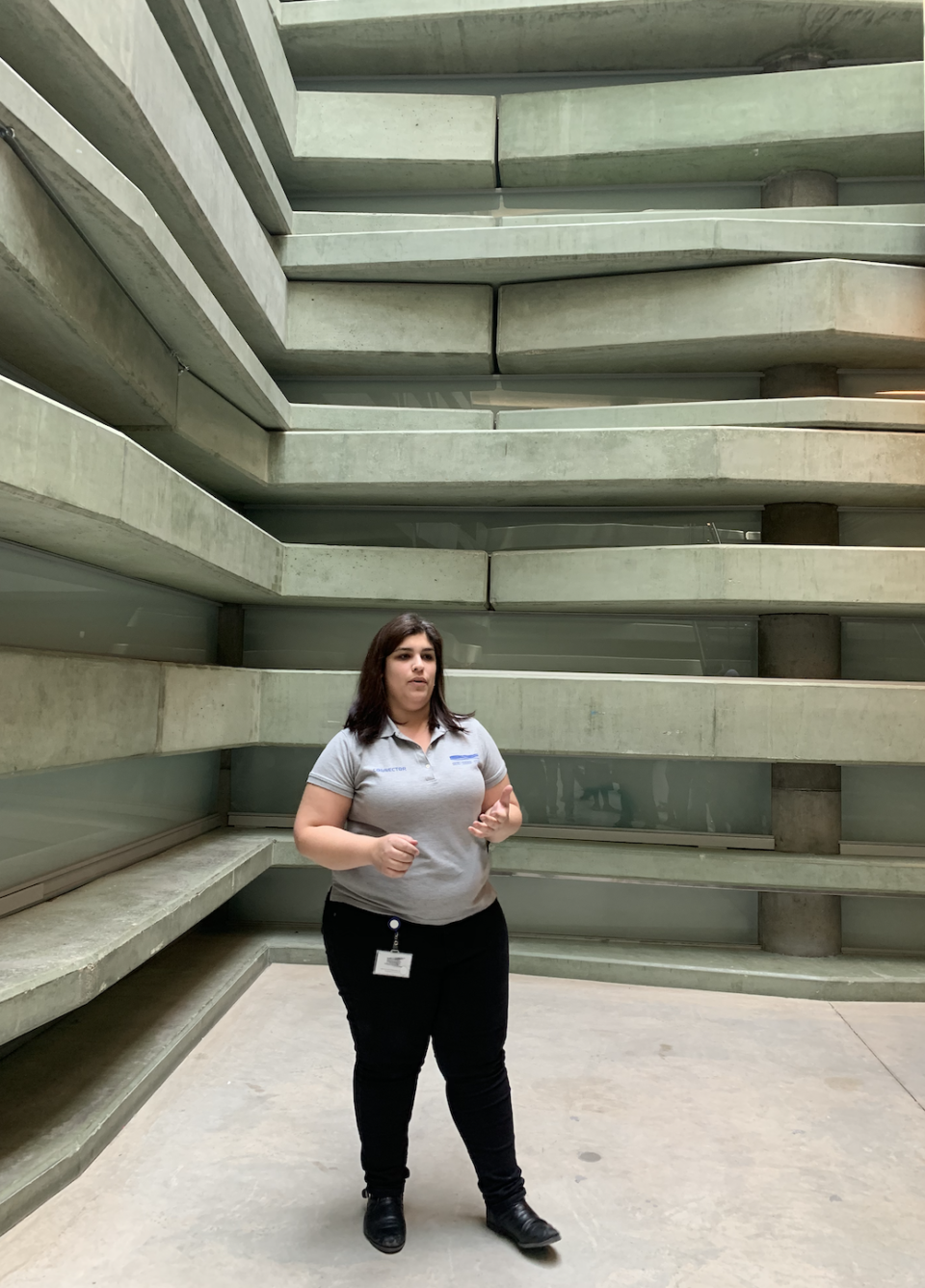 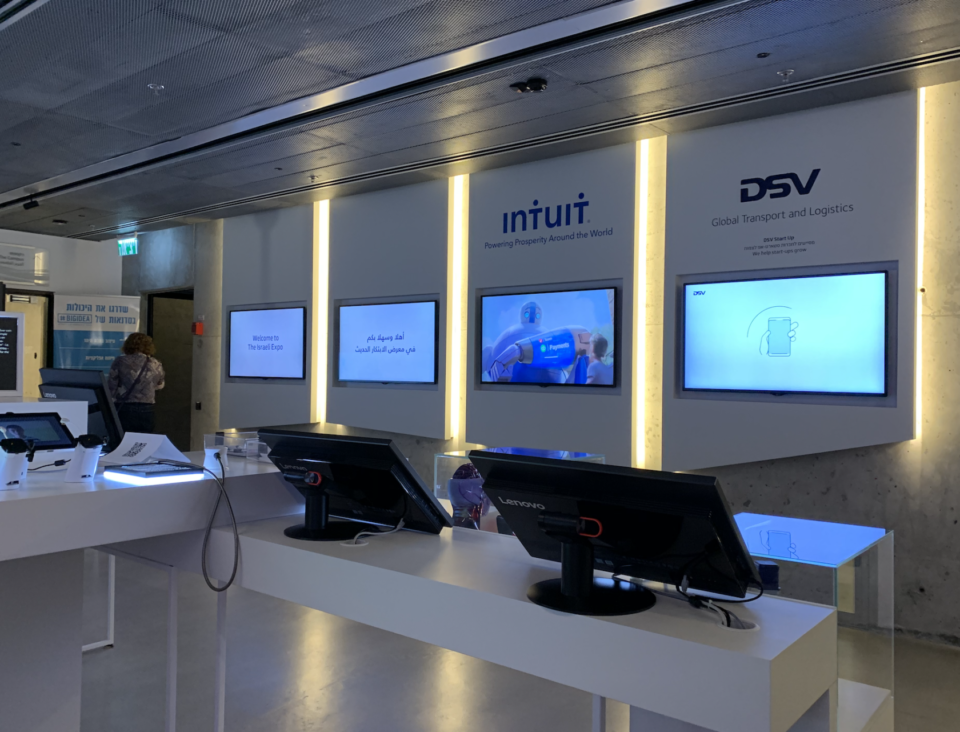 If you ever find yourself in Israel, you must visit this place. It will change your life. Especially if you’re an entrepreneur, especially if ideas, solving problems, innovation interests you. I left the center feeling invigorated and ready to keep this journey going, because what is the point of being on this earth for this short amount of time if you’re not going to make an impact? If you’re not going to leave a legacy?