On January 11th at 11AM, there’ll be a Liberty State Park Rally/Demonstration to support the Liberty State Park Protection Act and protest any proposed amendment allowing for the privatization of LSP’s Caven Point Natural Area. The rally will take place at LSP’s Flag Plaza (200 Morris Pesin Dr) at the eastern end of Pesin Dr. 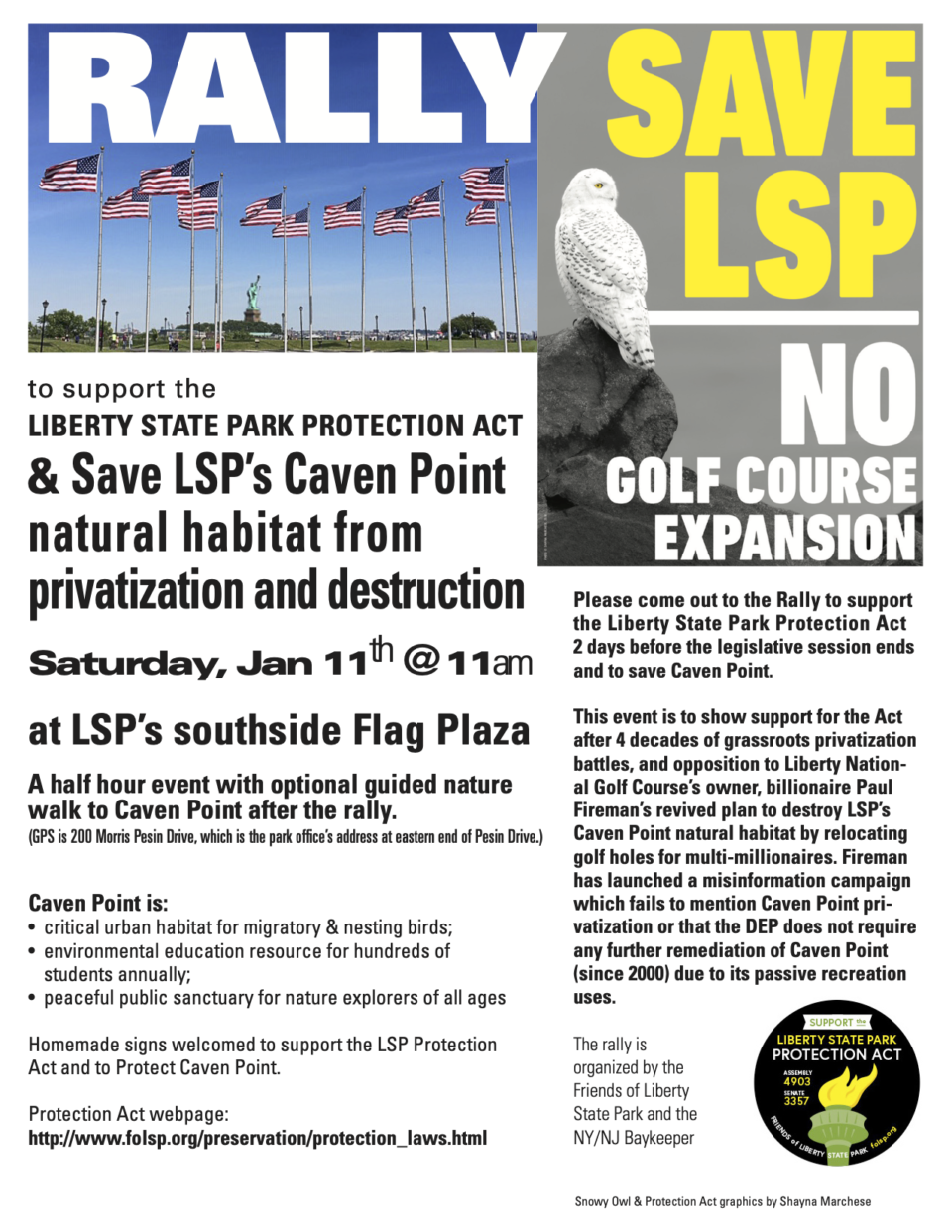 Over 50 local, regional and statewide organizations have joined a Coalition urging Senator Sweeney, Assemblymen Coughlin and Governor Murphy to ensure the Liberty State Park Protection Act – S3357 and A4903 – passes in this legislative session without any amendments.  “The Coalition to Pass the Liberty State Park Protection Act and Save the Park’s Caven Point Natural Area” is the latest in LSP’s 43-year history of grassroots battles against privatization. The Coalition letter with current signatories is attached.

The purpose of the Liberty State Park Protection Act is to protect the urban open space and nature behind Lady Liberty for future generations of park visitors and wildlife. After four decades of overwhelming majority opposition to privatization plans, no matter what revenue was promised, the Act would finally provide protections that are so desperately needed. Paul Fireman’s deceitful campaign to amend the Act and remove protections for Caven Point exemplifies the need for strong legislation to ensure LSP remains the People’s Park.

Please join the Sat. 1/11 at 11am LSP Rally & call Governor to save the LSP Protection Act & to Save LSP's Caven Point natural area habitat refuge from renewed privatization assault by billionaire Paul Fireman, golf course owner. The Rally flyer and Gov call info is at link in bio THANKS for fighting for LSP! Caven Point Photo by Michael Popowski

A post shared by Friends of Liberty State Park (@friendsoflibertystatepark) on Jan 4, 2020 at 2:01pm PST

Caven Point is a 21-acre stretch of land protected by federal and state regulations, with the largest stretch of natural beach in the Upper New York and Hudson Bay; saltwater marshland; tidal pools; mud flats; and 15 acres of upland maritime forest. It serves as critical and priceless urban natural area habitat for migratory & nesting birds, an urban environmental education resource, and peaceful sanctuary for nature explorers. Caven Point is described in the Act as “the estuarine ecosystem for plants and animals, critical bird breeding habitat, and urban environmental education resource”. For this very reason, Caven Point was acquired using both NJDEP Green Acres and Federal Land and Water Conservation Funds, and is listed on the NJDEP’s Natural Area Register as a site of significant natural resource value.

For more information about the Protection Act and the privatization threat to Caven Point, including editorials and commentary to provide context, please visit http://www.folsp.org/preservation/protection_laws.html