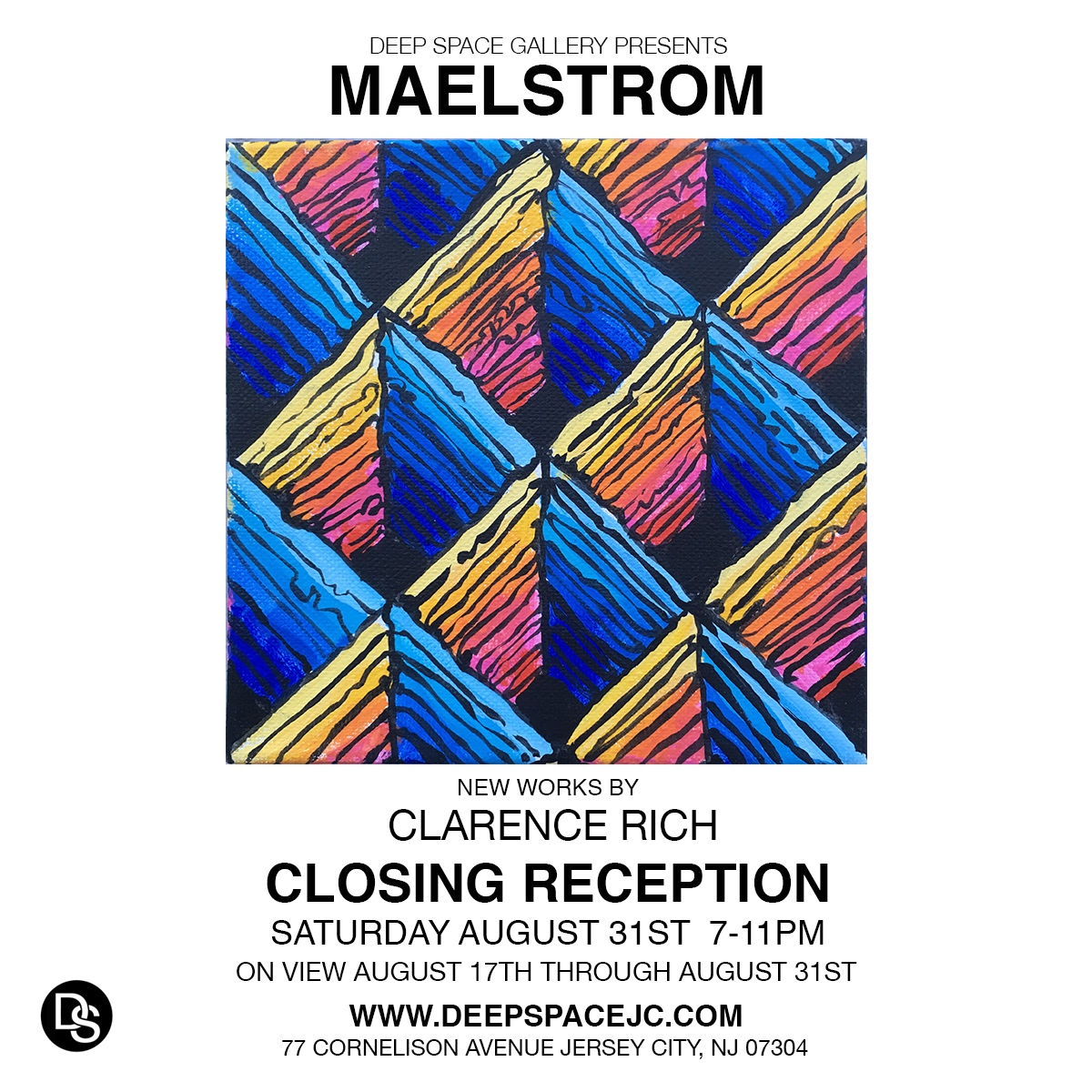 Please join us this Saturday evening, August 31st, from 7-11pm for the Closing Reception of MAELSTROM // New works by Clarence Rich. There are still a number of gorgeous paintings for sale in a variety of sizes, styles, and price points. Reply to this email if you would like us to send you a catalog of available works from this show.  Don’t miss this show by Jersey City street artist Clarence Rich — his murals can be found all over Jersey City (including ones you can locate on #JCMAP), take this opportunity to add one of his paintings or drawings to your personal art collection!!  See more about Maelstrom below ~

Deep Space Gallery is very proud to present Maelstrom featuring new works by Jersey City native Clarence Rich. This will be Clarence’s third solo show at Deep Space and once again, he brings us something entirely new and exciting.
The Closing Reception for Maelstrom is this Saturday, August 31st, from 7-11pm.
In the artist’s own words:
“When old and new ideas intersect…in 2008 I wrote and recorded an album called Mr. Maelstrom vs The World. I took songs that inspired me and wrote lyrics about self doubt and the struggle of feeling like an outsider in life and in my craft. Tracks like Electromagnetism and Weapon, about attraction and codependency, buzzed in the Jersey underground scene. They became an anthem for the outcast in all of us. My songs of doubt and pain eventually became empowering not only for myself, but for others, too. Mr. Maelstrom, the human vortex who ate all in his path, actually became a good thing.
In this exhibition I travel from the auditory vortex, Mr. Maelstrom, and into the visual, the sharp angular cipher telling a crystallized story. The work celebrates the harmony of vibration and creates the illusion of the perfected flaw.
Maelstrom is an amalgam of path, stroke and technique. Weaving colors and lines, and chain linking patterns, the repetition illustrates the multidimensional mind. A stairway to everywhere and nowhere simultaneously.”
Join in the Maelstrom.
ABOUT CLARENCE RICH:
Clarence Rich, a street artist that for the last 13 years has not only made his mark on the street, but also has challenged the gallery scene. His progressive work has inspired a younger generation of urban artists and continues to evolve and mature.
Rich describes his loose approach and technique as “letting his hand run wild.” His work is visually aggressive and conceptually deviant. With an incongruous palette of morose shapes, and sickly human-like characters he manufactures a world that is not yours or mine.
For a catalog of available works from this show or for gallery hours, email us at deepspacejc@gmail.com.
Hope to see you on Saturday night!!
xox,
Deep Space crew
DEEP SPACE GALLERY
77 Cornelison Ave.
Jersey City, NJ 07304
www.deepspacejc.com
www.artsy.net/deep-space-gallery
deepspacejc@gmail.com
@deepspacejc
@deepspace_reserve
fb: Deep Space Gallery
+ Google Calendar+ iCal Export