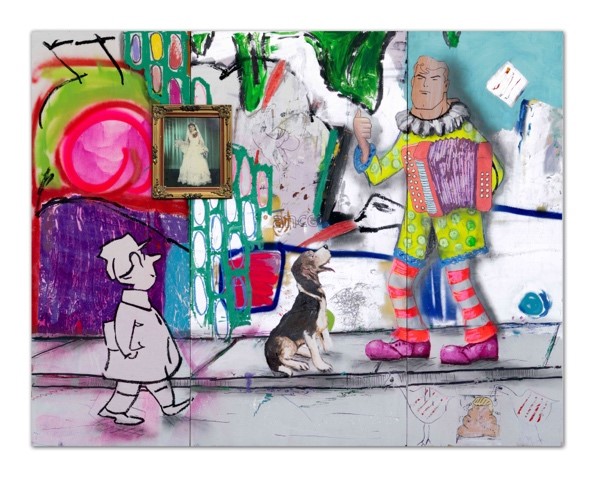 TriBeCa. NEW YORK, NEW YORK — August 28, 2019 – 81 Leonard Gallery, in collaboration with Ric Michel Fine Art, announces the opening of barrioPOP by Cande Aguilar, a collection of multi media art works focusing on the experience of living in a bilingual border culture. The Exhibit will run from September 5 through 28, 2019 at 81 Leonard Street in TriBeCa. The Artist will be present at the Opening Reception on September 5, 2019, from 6 pm to 9 pm.

A native of Brownsville, Texas, Cande Aguilar is a self-taught artist whose distinctive barrioPOP style merges the indigenous humor, challenges, sights and sounds of barrio life with the panoply of popular culture. Beyond the jaunty imagery, there is a gravity and poignancy to these paintings…border politics and the Immigrant’s struggle inform much of the Work. With four solo museum exhibitions in 2019… including San Antonio’s prestigious McNay Art Museum…Cande Aguilar is gaining great acclaim as an authentic and distinctive voice of the Mexican American experience. 81 Leonard Gallery is proud to host the Artist’s first solo exhibition in New York.

“Growing up at the border means you are never completely American or Mexican…it is an internally polarizing reality,” says Aguilar. Seizing upon this dichotomy, the Artist creates a new world of rich juxtapositions and shifting identities. The central figure in Chanito (above) is part Clark Kent, part clown, part troubador… a composite of contradictions. In Land of Peace (below), the icon meets the ordinary as Christopher Robin stands cheek to cheek with a child’s stick figure. In Suite of the Low Rides, (above) Charlie Brown, in barrio hat, eyes a low rider honey while an ensemble of Mexican and American cartoon figures look on. What do these paintings mean? Aguilar has his ideas but invites each viewer to inhabit and interpret the Work.

What is clear is that the Artist is increasingly influenced…and disturbed…by the developments at our Southern border. Even a seemingly benign piece like Madre y Mickey is not without subtext. The Madre/Madonna…aproned with an image transfer of a child’s coloring book…reaches toward Mickey (the archetype of childhood innocence) and yet a gap remains. A gentle but clear reminder of the family separations that continue to this day.

An accordion prodigy, Cande Aguilar began playing professionally at age 13 and went on to become a Gold Record recording artist of Tejano/Conjunto music. In his 30’s, Aguilar turned to painting full time earning great acclaim for his barrioPOP series.

Based in New York City, 81 Leonard Gallery is an artist-run space representing artists from around the globe. 81 Leonard provides a platform for emerging and established contemporary artists to stimulate engagement in critical thinking and culture. Through its diverse multi-media program, the gallery focuses on bringing underrepresented and marginalized artists to new audiences. “Art and artists play an increasingly important role in the world we inhabit. With a commitment to artistic freedom, we are interested in artists that investigate the conditions of our present society and what the future may hold,” Nancy Bergman Pantirer, Founder & Elaine Mitchell, Director.

Ric Michel Fine Art, Private Dealers/Art Consultants, has been active in the International Art Market for over three decades. Drawing upon its vast network of emerging artists and museum masters, RMFA serves a diverse clientele of corporate and private collectors.