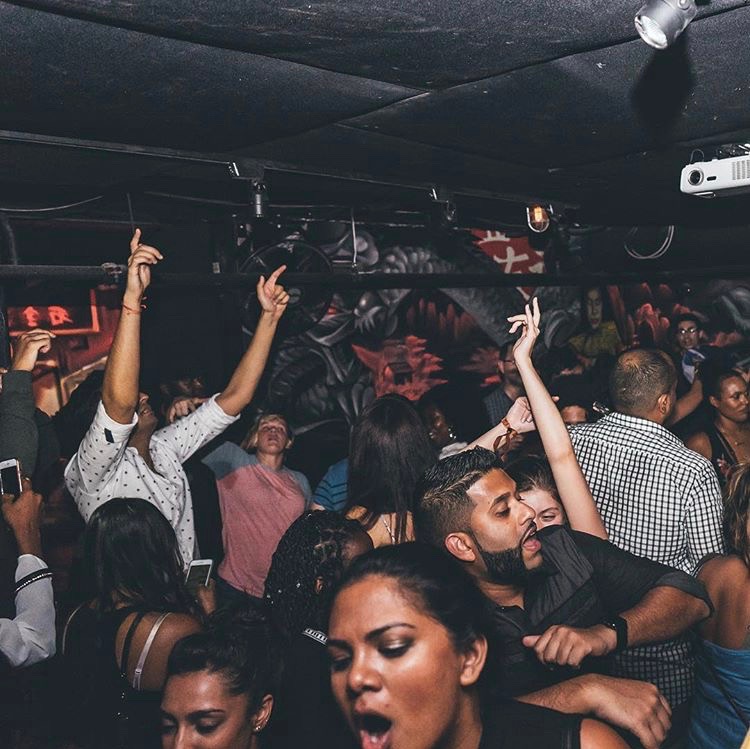 Jersey City has changed so much in the last decade. 10 years ago when I moved here from Manhattan, there weren’t that many spots to “cut a rug” and now the nightlife in JC has grown tremendously. Spots like Porta, Miss Wong’s at Talde, and Red Lounge all have DJ nights and Jersey City has become a nightlife destination.

Be careful what you wish for. Some might say Friday and Saturday nights on the Pedestrian Plaza aka “Restaurant Row” has become a total nightmare. Fights, sexual harassment, drunk “out-of-towners” everywhere, garbage on the street, noise complaints, etc… 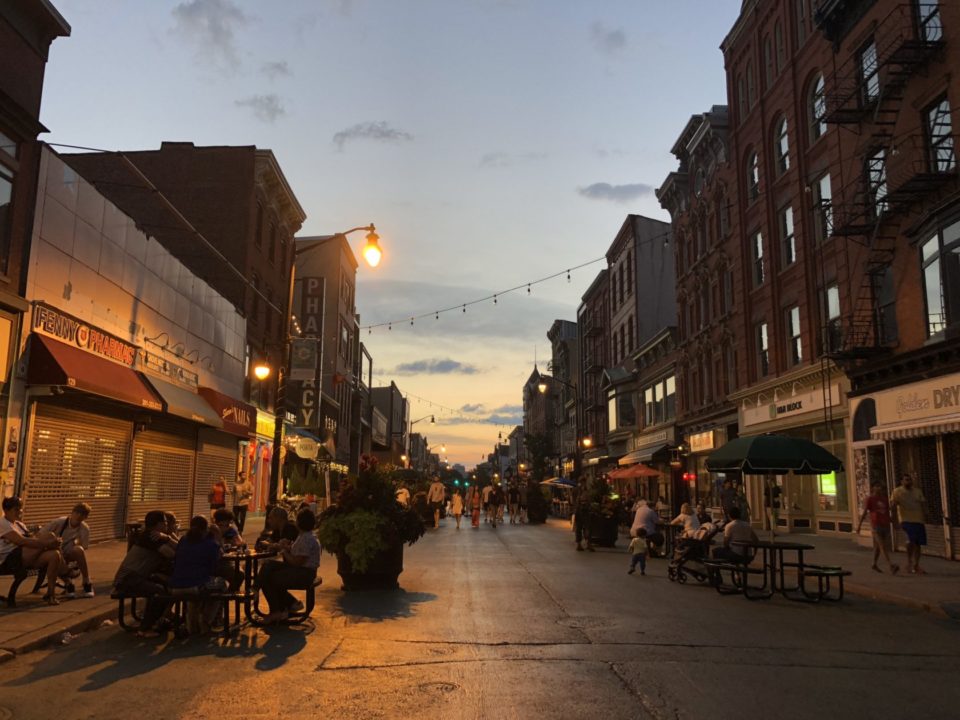 The Jersey City nightlife has become part of a big debate – is it a good thing to have fun party options in our city, or is it causing a big mess?

Some residents are complaining about the nightlife, but the bars and restaurants need it to survive. At one point, the city decided to shut down DJ nights on the plaza (which was temporary) and everyone in the industry was greatly affected by this. The issue here is, who’s right?

Can I remind everyone we live in JERSEY CITY, a city right across the river from the BIG APPLE? If you think Newark Ave is noisy, move to a studio in the East Village for a gazillion dollars, and you’ll hear all kinds of interesting shit. OR better yet, if you think Downtown JC is too noisy, move to the ‘burbs! Birds chirping sounds relaxing. 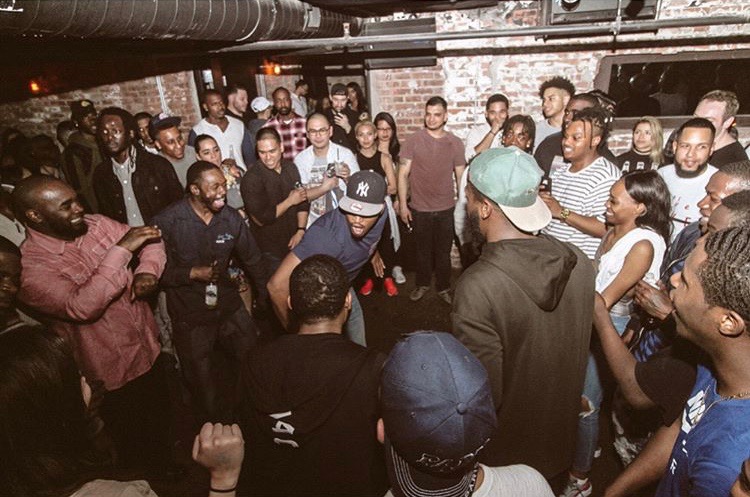 I personally love being able to hit the town and see my local DJ friends do their thing, support local businesses and fellow creatives who work in the service industry to be able to afford to live here… then end the night at Stella’s for a post drinking slice and pass out in my bed without having to take the PATH train anywhere. I moved to Jersey City to be able to walk everywhere, work, eat play. So whats the real issue? and how can we fix it?

I recently sat down with DJ Stadium Status, who DJs across town and also curates nights in JC and in the city, to get the low down on what’s going on in the nightlife scene.

I’m a DJ, a promoter, and a nightlife manager.

It’s a reference to a song I liked and I feel like it represents the bigger mindframe, bigger goals.

How long have you been DJing?

Since I was 16, but full-time professionally for 6 years. 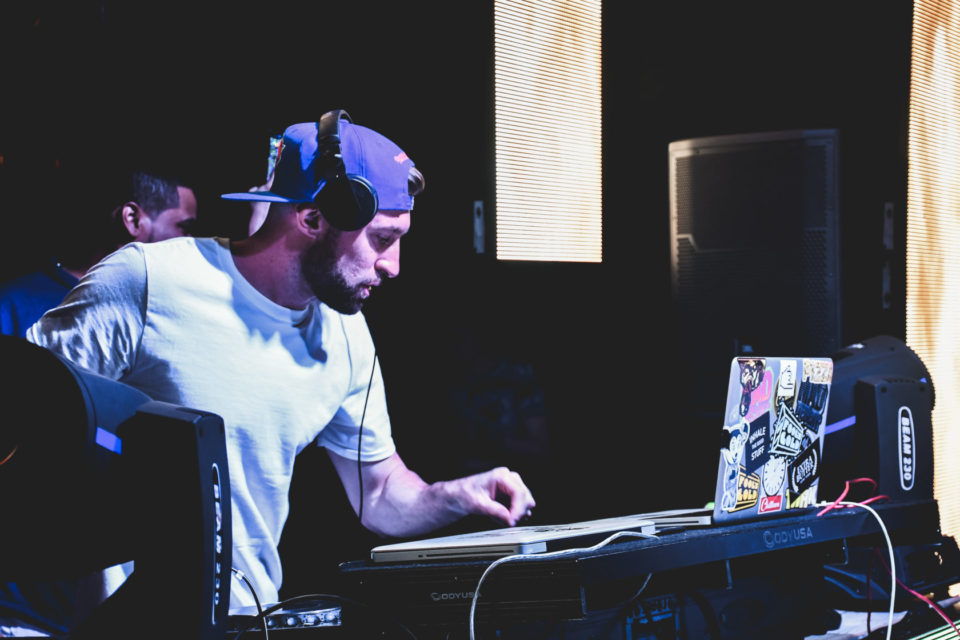 When did you start in Jersey City specifically?

How did you get into it?

A friend of mine knew an owner of a venue out here, so she linked me and that’s where I started.

Going from there, you started curating events, right? How did that start?

Back then, there wasn’t really a nightlife scene to begin with. Once I saw more venues popping up and the venues didn’t have relationships with DJs or knew who put parties on out here, I took it as an opportunity to come in and get the right people in there. I used it as a foot in the door to start building the scene.

So basically, what you do is hire different DJs for different nights at different venues.

Yeah. Now, I work with venues but I’m pretty exclusive to one out here.

How do you feel the nightlife has evolved since you started into what it is today?

There’s a lot more options, there’s a scene growing. I think it’s growing positively, more people are coming for the weekends. Culturally, I think it’s in a weird transitional period. A couple of years ago, we used to have a really good weekday scene where you would get decent crowds on Wednesday and Thursday nights. Now, venues are starting to struggle during the week, which I think shows the shift in who’s moving to the city.

There’s definitely a great local scene, and the weekday parties are more of a local scene. While there are a lot more options, I don’t think there’s enough people to fill those spots. There’s a lot of growing that needs to be done. 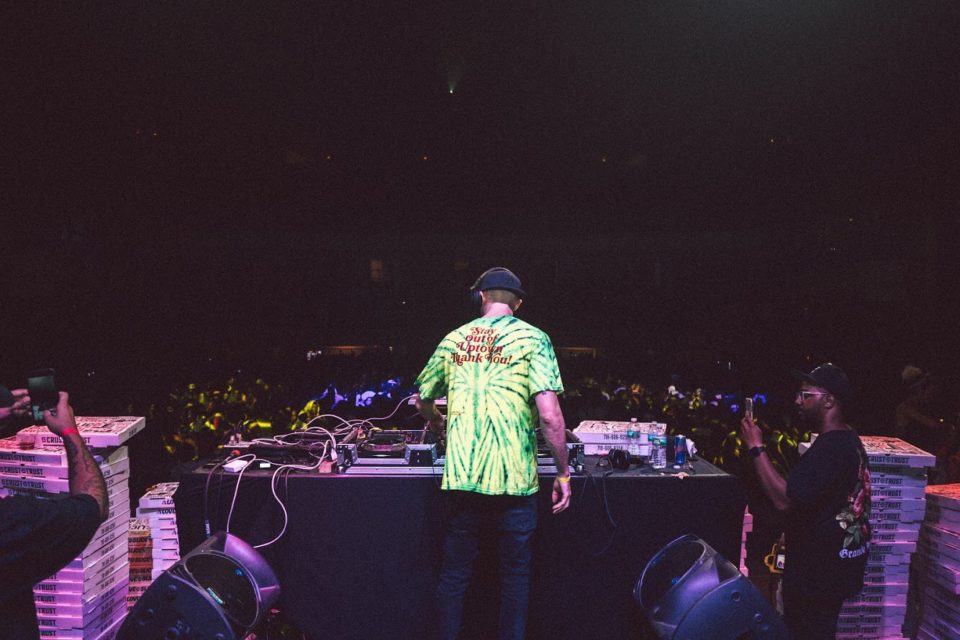 I feel the same way. When I did events a few years ago, I would sell out right away. Now, there’s so much competition that it’s a struggle to push tickets. Do you think the city is growing is too quickly or too competitive?

I think it is, to a certain extent. I also think the shift in the city changed where it’s not as culturally focused as it use to be. It’s more condos and getting people moving here, and it’s turning into a commuter city where people just come here because it’s close to NYC. They come here to sleep, but they don’t spend their time in Jersey City. I think that’s something to be considered because how can local businesses survive if the people that move here aren’t really concerned about the city? They’re just concerned about the location of the city.

Who are the main people in Jersey City nightlife that throw events?

Besides myself, there’s Lovelisa who runs Chilltown Collective. She’s a Jersey City native, has been throwing parties for a long time now, and she has residencies at several venues. She’s a manager for Cipha Sounds and has an impact that even expands outside of Jersey City.

Hayoner, JC native and local entrepreneur.  Not only is he active in the community outside of nightlife, but has also played a huge role in building our nightlife scene to where it is now. The events that you guys collaborate on have brought different concepts to experience that haven’t been offered prior.

There’s also DJ Marvelous, Bizz Nice, Dancing Tony and a few other key players. These are all people who have been out here for a very long time leading the nightlife culture.

Talk to me about the legal perspective and what’s been going on in the city in terms of noise complaints, the expansion of the pedestrian plaza.

I think nightlife was something that was overlooked in the city. It comes from improper planning on the city government’s part. When you zone off Newark Ave for Restaurant Row, I think it’s implied in the name that you weren’t considering the nightlife aspect that’s going to come with that. When the structures are so big and there are a lot of large-sized venues, there’ll be a lot of people in a designated area. When you have a lot of people with alcohol involved, it’s inevitable that you’ll want to keep incidents to a minimum. On Grove St, it’s a lot of smaller structures. If you wanted a restaurant row, it would’ve been more manageable if it was on a Grove St-style street than on Newark Ave where you’re forced to have these giant venues. The restaurant industry is in a tricky situation because a lot of restaurants are being forced into nightlife, they need it to survive. They don’t necessarily want to do it, so you have a weird dynamic between DJs or nightlife promoters and restaurant owners.

In the city, you have this designated area where a lot of people are coming out and the businesses need that to survive, but it’s about managing these crowds and making sure the venues are handling the crowds while being in line with the city so everyone is safe. I feel like, now with the residents complaining about noise, the city is starting to get involved. It’s still early enough for us to work together and get ahead of these problems. It’s early in the development of the city and the nightlife here. I think it’ll take the cooperation of venue owners, the city, and the people drawing the crowds – DJs, promoters, people like that.

What do you feel needs to get done in order for the state of nightlife to get better in Jersey City?

I think when things go wrong at an event, the DJs get blamed for it. People think we’re rowdy people who want to turn up and cause fights, which is not the case because that ruins our nights too. It’s about the city having a positive outlook on nightlife. You’re already seeing that trend in Europe. It’s very popular where they embrace nightlife because they know it brings revenue and encourages tourism. It’s about embracing it and seeing it for the positives of what it brings to the city.

Mayor Fulop recently tweeted about working on hiring a bar czar, which I think is a big step. There’s a clear disconnect that he has with the city because he doesn’t really know anybody that runs the nightlife out here and doesn’t consult with any of them. I’ve reached out a few times and we’ve talked about it. When residents started making a lot of complaints about the noise, I wanted to get ahead of it as somebody who’s a part of the community. I reached out to him about handling it responsibly and getting ahead of it so everybody wins. After meeting with council members, it kind of didn’t go anywhere. So to see him making moves toward this but not including the nightlife community…

Last year, he tweeted out a comment attacking DJs for the cause of the problems that were happening at these venues. I think by saying things like that and then moving forward on nightlife decision without including the nightlife community shows a disconnect, especially when we’re trying to take initiative. I think it sends a clear message of not wanting to participate with us. 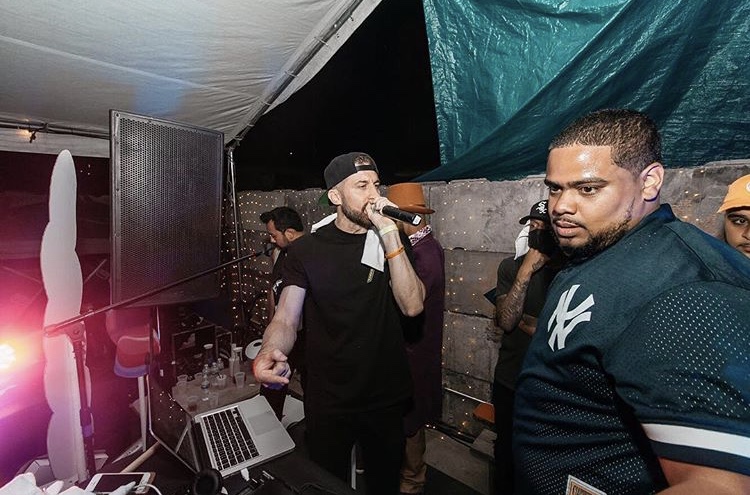 And nightlife is an integral part of living in an urban community. I’d rather hang out here than go to NYC, and you want to appeal to that crowd. It can’t just be families and business people, it has to be inclusive. I think the city has done a lot of great things culturally for the arts, but nightlife should be a part of that.

Definitely. This would obviously take more planning, but in a meeting with Councilman Solomon, we mentioned a nightlife district and potentially zoning an area for this so it’s not in the middle of residential areas and buildings. You avoid the complaints. If there’s a possibility of having our own district where the people of the city don’t need to be disrupted, we can have a balance where everyone gets what they want.

Where can people find you?