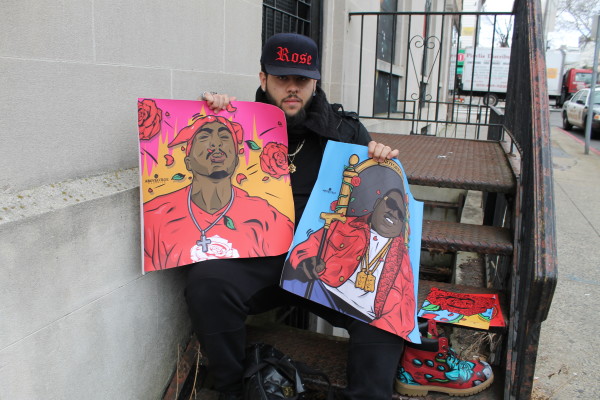 I went to Sneaker Room to interview the guys that run the store; Haytham and Jeff…. Jeff manages the store but he also happens to be an extremely talented graphic designer and artist.  During the interview, Haytham kept saying “Jeff is our generations Warhol”. His claim obviously piqued my interest so I checked out his work. Jeff Rose’s art is like nothing I’ve ever seen before. His art is all made digitally, and it is centered around current events and the underlying theme in all the images are roses. 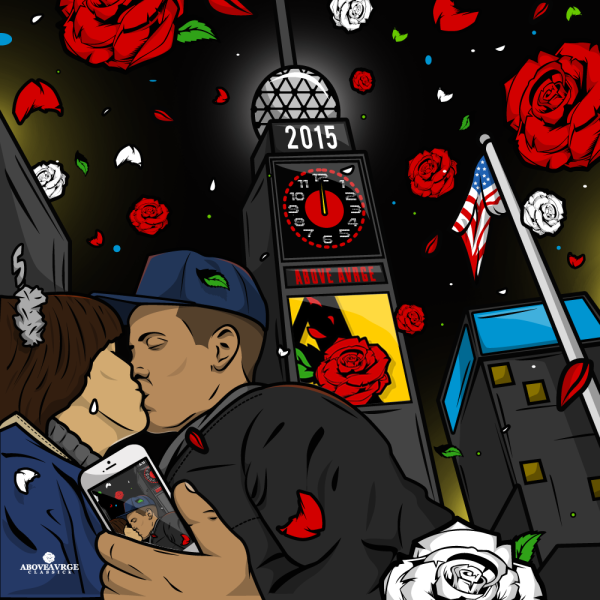 I needed to hear his story. I went back to Sneaker Room to meet with Jeff and we went for a walk on Central Ave. We sat down and talked about his art, his journey to Jersey City and the Sneaker Room. I wish you could all meet him one day, he has such incredible energy, is extremely warm, friendly and has a really great outlook on life. At the end of our interview, Jeff gifted me with a print of his Notorious B.I.G piece (who is my favorite rapper, dead or alive), and looking at it I got choked up. It’s one of my favorite pieces of art, whenever I look at it I hear Biggie’s song “Sky is the limit” playing in my head. 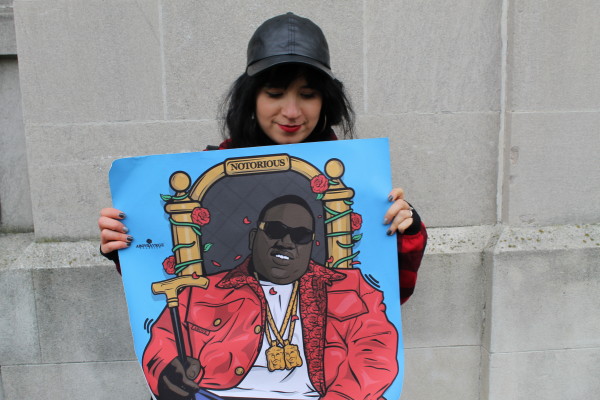 What’s your name? My name is Jeff Feliciano, but everyone knows me as Jeff Rose. 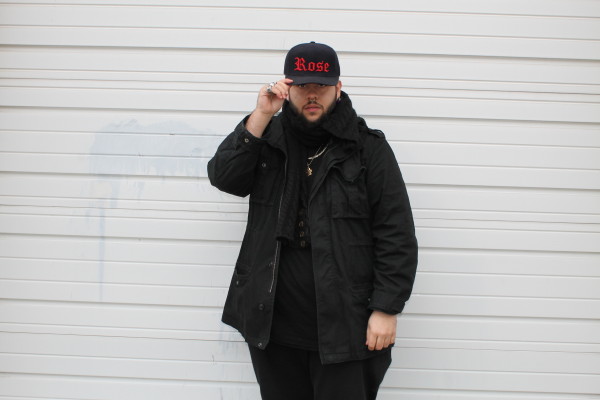 Roses are obviously a theme in your work… Can you explain that? The rose, it comes from growing up, my grandmother was obsessed with flowers… so that was installed in my mind for a long time, and as I got older and wanted to establish a brand I wanted to have something to represent… Something that was classy, but street at the same time. 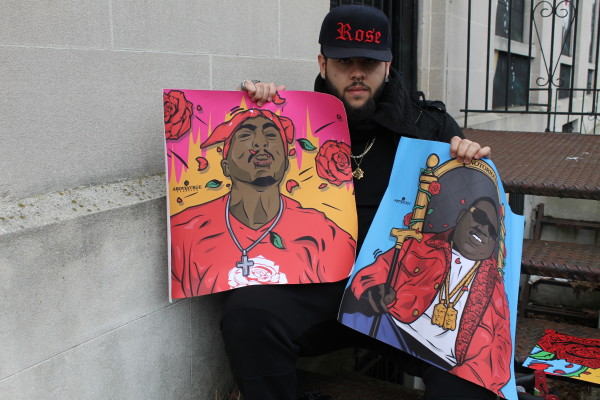 The rose, it represents how we all grow from the ground up and once we develop who we are as people we become that beautiful rose, for me I wanted that to represent the love, the passion that I have for what I do. I’m kind of obsessed with branding so I wanted a symbol that people can see and understand that it’s me, without me having to put my name or signature next to it. I wanted people to know that, that’s Jeff Rose, and understand that representation of the love and passion that I have. 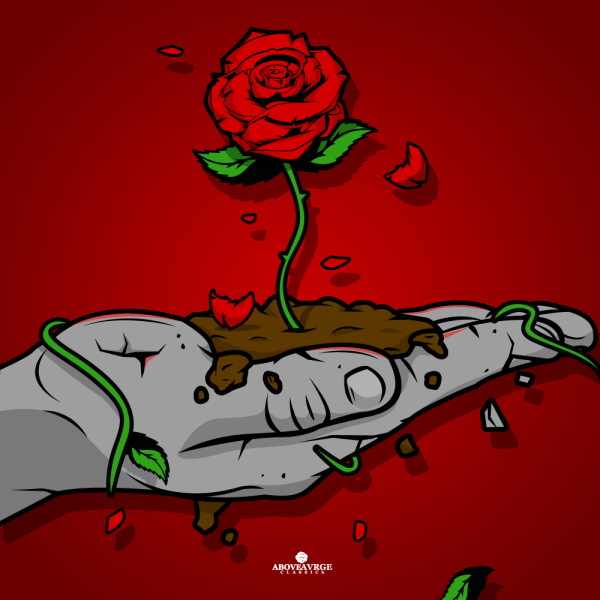 Can you describe your style of art? I would call it pop-art, but I don’t like to put a title onto it. I feel like im starting a new lane of artwork that’s never been done before and I don’t see a title for it right now.

It’s all digital right? Everything is on the computer, I do a couple of hand painted stuff here and there but illustrations completely took over my life when I was like 17, I’ve been drawing my whole life. I don’t want to say its pop art but it kind of is, because I’m taking what’s going on around me and what’s going on in culture, I guess you could label that but at the same time, I feel like I’m story telling through my illustrations and I don’t see many other artists doing that. I feel like it’s my opinion of what’s going on.  That’s how I come up with my illustrations, and at the end of the day I’m story telling. 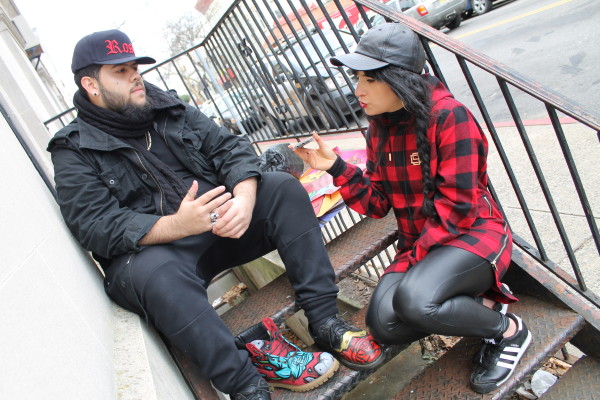 How did you get into it?  My dad is a computer technician. He gave me the Apple  Mac G4, in the blue, I didn’t open that computer for like a year. I was drawing at the time but Graffiti was really big and that was such an influence for me. When I dropped out of High School, I was only 17 and shit just started racing in my mind, like what am I going to do… so I just opened that computer, opened up the generic Photoshop, wasn’t feeling it too much so then I transitioned into illustration and I learned all by myself just messing around, and I’ve been doing it 8 years now. 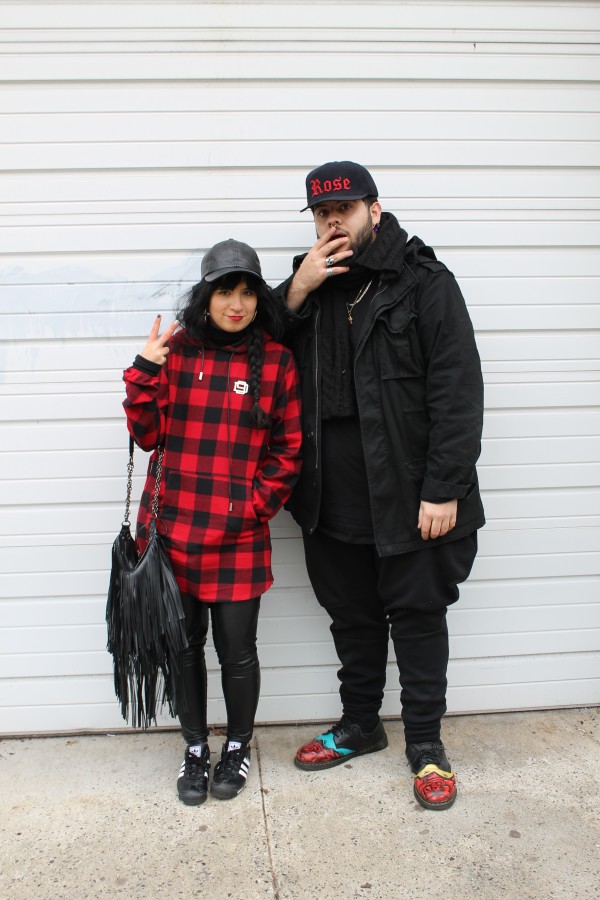 Your work is so colorful and vivid, its beautiful. I think that’s why you can consider it pop art you know.. people like Warhol… 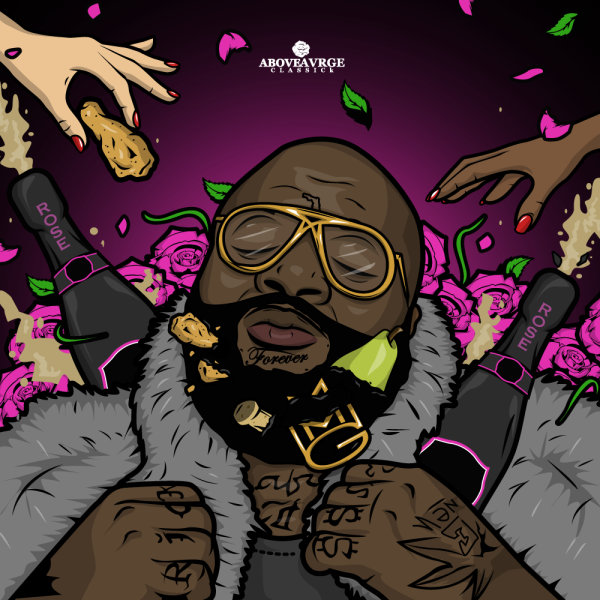 Haytham (from Sneaker Room) said you are our generations Warhol. I like that! I do, you know I want to be myself but they (Sneaker Room) opened the doors for me. I’m just trying to make it out here and now its acceptable, people like Warhol and Keith Haring, they opened the door, they got away from the fine art, as soon as Jackson Pollock came onto the scene. 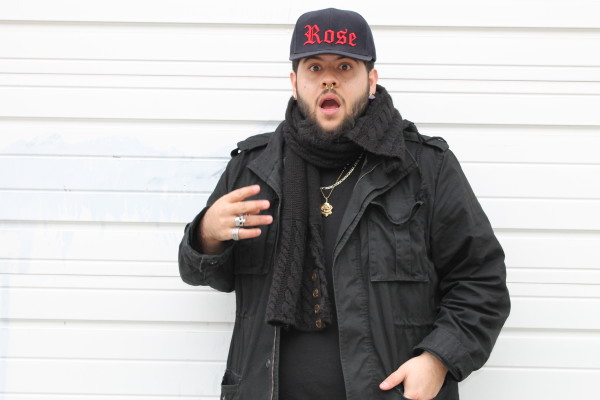 Whats your creative process like? Like I said I like to go off of current events – that’s my inspiration. If you go on my instagram, you’ll see that it’s just everything that’s going on. If it’s a big enough event, I want to give my opinion on it, and how I see it. Most of the time I just grab that inspiration of whats going on, and I flip it to where what people wouldn’t think of, I like a clean concept where you see the story behind it. I don’t sketch much anymore and people don’t like that, but I take real pictures off the internet or maybe a picture I’ve taken, and just re-illustrate it.

How long have you been in JC? 3 Years, from working at Sneaker Room. 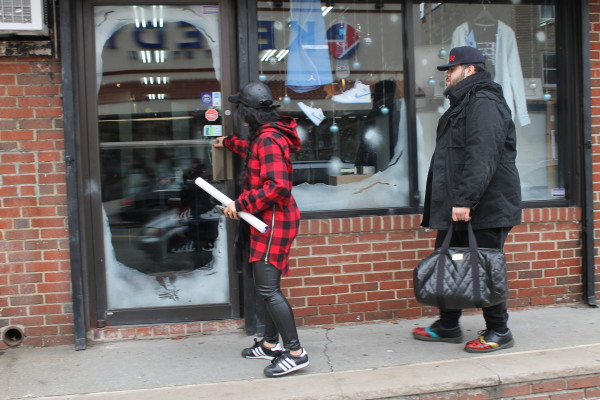 How’d you get here? It was 2008 and I was doing a design for Suraj (owner of Sneaker Room). I was broke as hell, I was like I have nothing to do out here in Miami and I been there 10 years, I was like I just need a ticket, so I just bounced grabbed one suitcase and put my Mac in it… 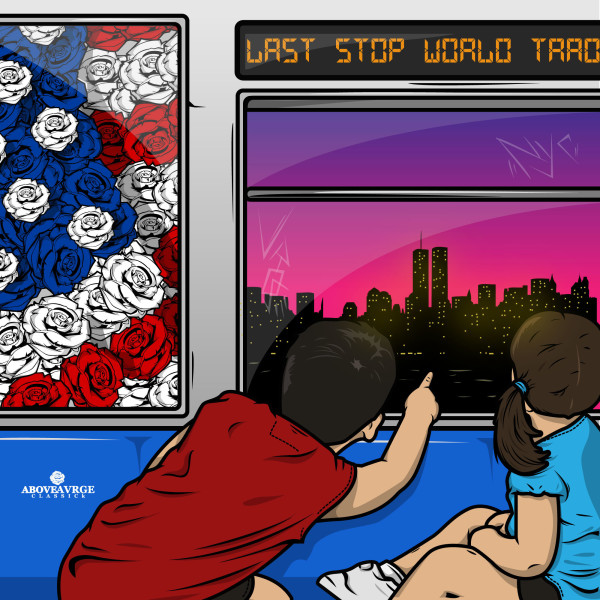 Suraj was a big help for bringing me into the company. I lived in Rahway so the train home was expensive I was just getting by with the cash Suraj would give me and now I’m managing the store. 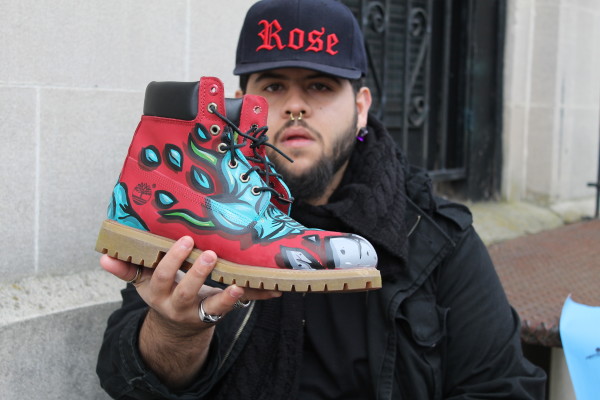 So whats next for you? Gallery party, I think. I’m trying to do Febuary 13, the day before Valentines day, which plays off my rose theme, that’s the next step. You know, getting myself out there having people see me who might’ve never heard of me before. 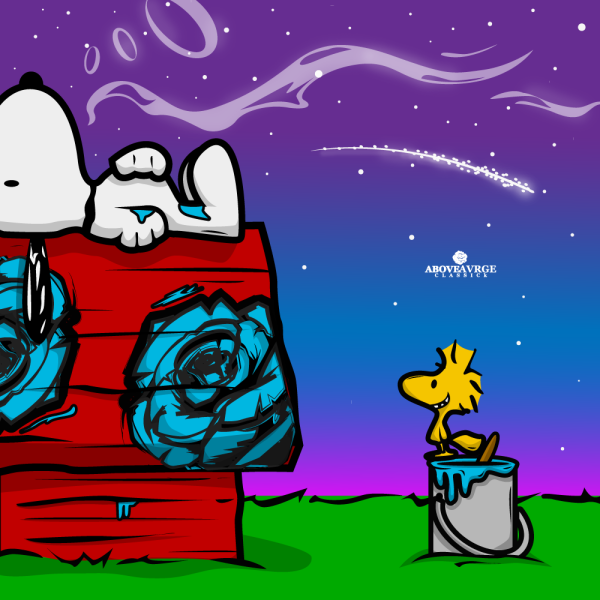 So do you go by above average or Jeff Rose? “Above Avrge” is the brand, I took a break from my clothing line to dedicate my time to art, but the clothing, i’ll be dropping after the new year. I was hand painting t-shirts when I was 17 and that was Above Average. Jeff Rose is me as the person/artist.

You’re huge on Instagram! How did that happen? The advantage of art, is people want to brag about it, they think it’s so cool, these days you have to post everything. People kept posting pics on big events and I did too, I did something for Derek Jeter for his last game, and on instagram just by hashtaging, every other pic was my artwork. 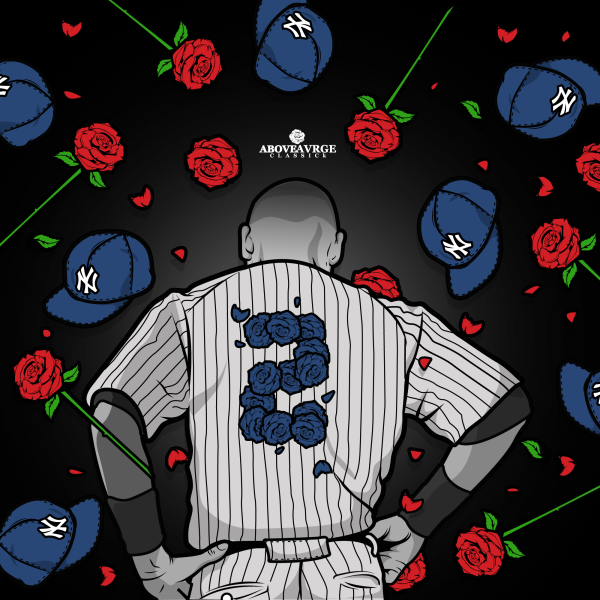 It goes viral. People with bigger followings that follow you helps, Puff Daddy had posted stuff of mine and has followed me. Rick Ross has commented on a few. People are aware of that. I want to be at 100,000 already. 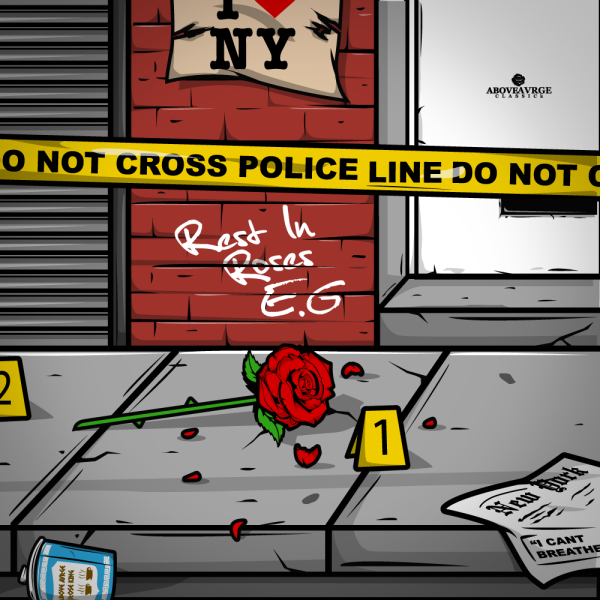 Are you currently selling your artwork? Yes- I have a website weroseabove.com and what I do is I sell limited prints. I sell 2 dozen / 24 prints back to the rose theme, I sell 24 prints for 24 hours, I sell out most of the time, I don’t hit it every time. but I drop once a month.

Do you have a favorite JC Hangout Spot? I mean, Central Ave probably. You know from here all the way to Faded…it’s just you see everybody, everyone knows you… you’re short two dollars you bring it back tomorrow. 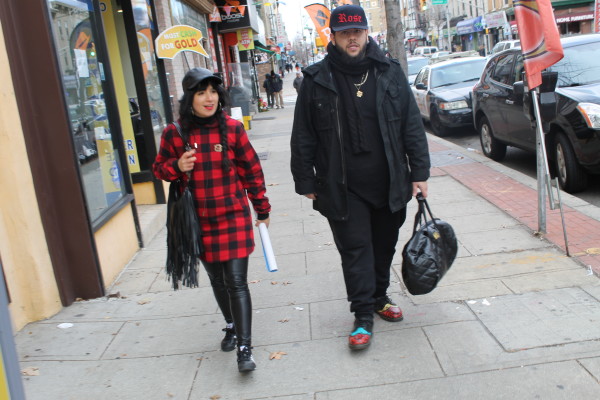 Anything else? Thank god for social media, but like I hope to blow up, I see it in the next few years. This is not just for a following, I’m trying to feed my family and hopefully have a wedding with this art money… I want to hopefully open the door for the next person who is sitting at home doubting their artwork – as long as you work hard,

if you love what you do then it’s not even working hard, it’s just living life. 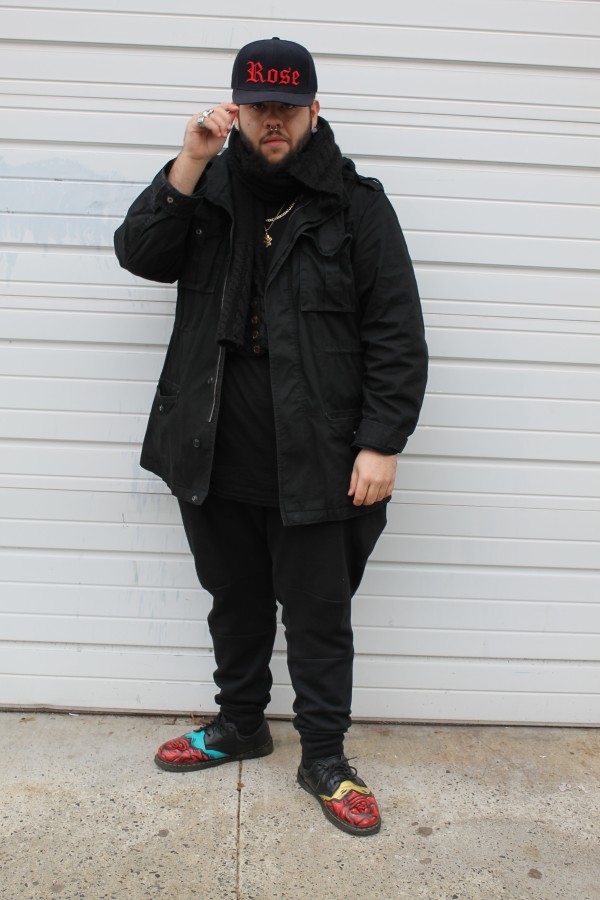 So congratulations on your engagement, I am guessing your wifes flowers are going to be roses. Do you buy her those a lot?I try to every other Friday, sometimes the train isn’t selling them and I cant find any. But I proposed to her with a canvas. I laid out dinner, with roses. And then I took the cloth off the hanged canvas and proposed. 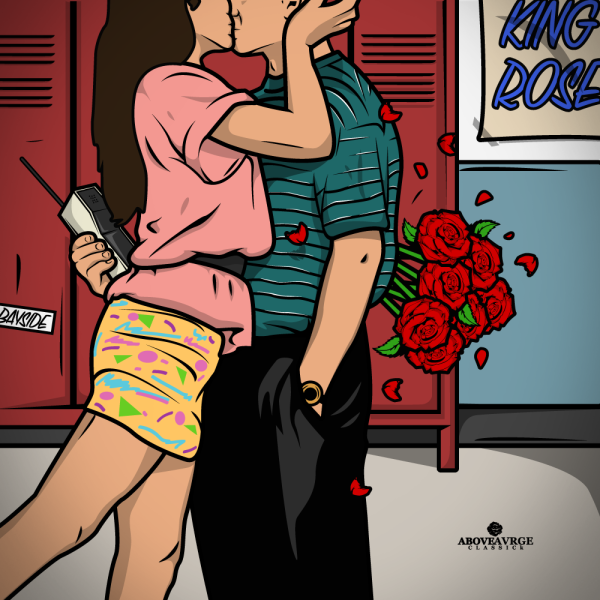