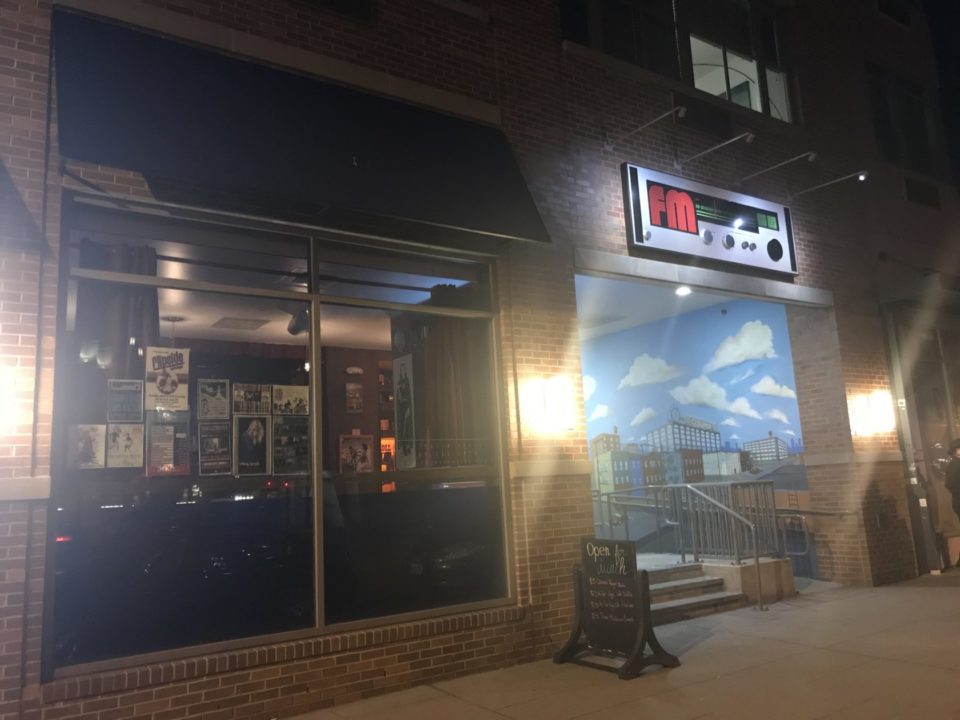 With a music scene as vibrant and diverse as Jersey City’s, there’s always live music happening somewhere in town. There’s a lot of restaurants and small rooms like Fox & Crow, The Hutton, and Brightside Tavern hosting live music, and we’ve got places like the awesome White Eagle Hall hosting huge audiences for both local and national acts. But there’s been a huge gap in the community in the form of a small to midsize venue with a dedicated stage for the small to midsize band. That’s until now with the reopening of FM as a venue with a dedicated stage as well as a bar.

I wanted to get a glimpse into this huge addition to the city, so I sat down with Dancing Tony of the Rock-it Docket – the man in charge of booking at FM, Groove on Grove, and probably every other event with live music in Jersey City you’ve been to in the last decade or so – to talk about the new stage, the state of live music in Jersey City, and his aspirations for growing out the local music community. 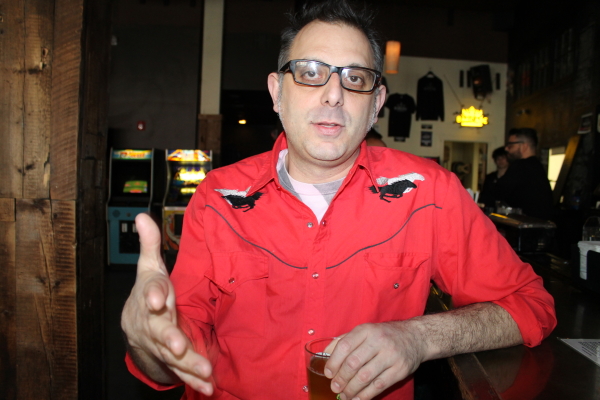 Tell me a little about FM!

Well, it was a 70s-themed restaurant you might remember, and it was good but it just kinda fizzled out. People didn’t really want to eat 70s food every night, but they came to me with an interest in having music and that was a huge opportunity but there wasn’t really a good way to set up the space as it was. So FM closed down to renovate and we built out the stage, and now we’re a venue, we’re a bar with great food, 30 different types of sauces.

Yes, the fries are awesome! I really enjoy the crack sauce and the wasabi mayo.

I used to go into the city all the time for pommes frites. You think, “How hard is it to make good fries?” But people still mess it up so I’m happy to have it at our place. And there’s sandwiches and wings, though I feel bad when I think about all the chickens it took to make a plate of wings…

But it’s really exciting because we’re booking shows every weekend and FM is not just gonna be a rock club – we have metal, hip-hop, jam band, cover bands, DJ nights, we have the weekly Open Mic on Mondays to give solo acoustic acts a chance to play, etc. We’re just trying to get music back downtown and build it back up.

So how’s it feel now that you have FM?

This is my dream-come-true scenario getting to book shows at FM. The downside is that dreaming implies you actually get to sleep sometimes. Instead I’m exhausted since now I’m booking as many shows in a month as I used to in a year. It’s great – there’s more opportunities now – but you have to be really organized.

An important thing for me, the same with Groove on Grove, it’s a way to promote other bands and music environments in Jersey City. And it’s not a conflict thing with Groove on Grove and other venues because it’s about the exposure, and it’s family-friendly – you can’t take your kids to bars. And it also gives me an opportunity to broaden my horizons with different styles of music, and I want to do that with FM as well. From what I understand, a stage and venue of that size was something Jersey City’s been missing for a while.

Right, the only other stage downtown right now is Brightside Tavern. They have a small stage they use to host some bands, karaoke, and jazz. There used to be Jordan’s Lounge, but that’s been torn down and now there’s condos there. Otherwise, there really aren’t many places that have a stage with a built in environment. We have Fox and Crow, we have The Hutton, Pet Shop is doing stuff, Madam Claude, Moor’s Lounge – these places all have rooms that host music but we haven’t had the size of room that we now do with FM. 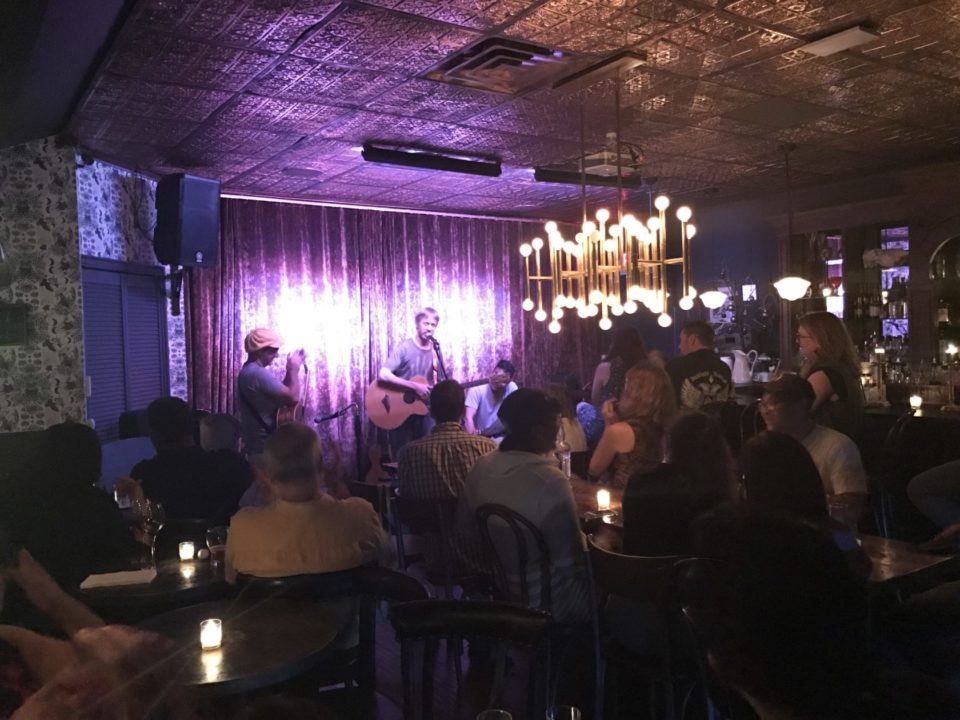 Yes! What an awesome place!

It’s great! But as a smaller band still growing your following, you can’t play there. Those are shows more for Pet Shop and the like. But Pet Shop in particular can only do shows once a month so they have live shows few and far between since they have neighbors upstairs and they can’t sound proof.

There are some other places doing some shows too, but it’s important to see what type of business model are they’re doing. Are venues interested only in the numbers or are you interested in the art form? The numbers are important – after all, venues need to survive – but what about the music? There’s plenty of places in NYC that require you to sell a certain amount of tickets, but I never want to do that. Bands that are good will eventually get a following and if they’re really good they’ll get a band manager to help with all the pressure and hard work it takes to make things work.

Where do you feel Jersey City is in terms of music?

We’re getting closer to where I want to be, we’re filling in pieces of the puzzle. We have a great opportunity with FM, but there should be more. Even though it competes with businesses we have, it’s good to have more. More stages – that’s what makes it a music town.

We have one window at FM where anyone can post on about their live shows, even if it’s not at our place. Because we’re trying to build a music community and when you see the posters on the window you see it and you say “that’s a venue” and you know to come there. 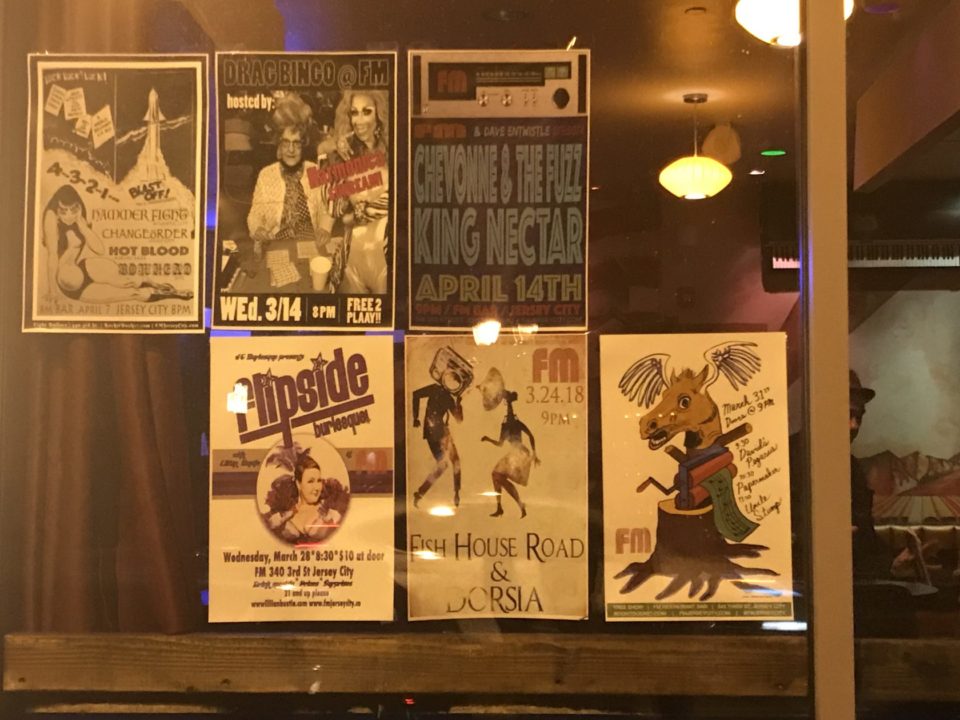 So what other puzzle pieces are missing? What’s the goal?

We need one or two more small music clubs. There’s some small stuff – TeaNJ does stuff, Art House does stuff, Porta has bands, but one or two more dedicated stages would be great because there’s so many artists who reach out to ask “Hey, can we place at your place?” and my answer for the most part is “Yes, I just don’t know when.”

Do you have a lot of people helping you out?

No, I have one or two people. I’m definitely looking for help, just throwing that out there. Right now, I get to be the roadie at my own shows. I’ve kinda got it down to a system in a way, but I want to get a decent street team because I still believe in flyers. I know a lot of people spend time looking at their phones and you need an strong internet strategy, but people still look on small boards and such. But this city doesn’t support street teams, at least not downtown. I mean, I work for downtown but I’d like to be able to just put a flyer on the telephone pole but that’s how it is. 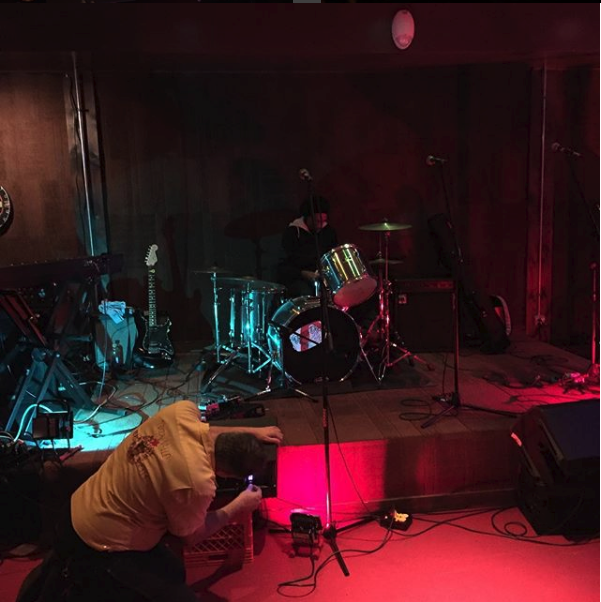 Do you know of any stages like FM that are trying to pop up outside of Downtown?

They’re probably out there but I just don’t know. There’s all the places in the heights, there’s also the Statuary. If you’re a jazz person, Winard Harper does shows at Moor’s Place. There are lots of spots try. I know there’s definitely been some great places that have closed down. Especially lot of places that get setup and then close down due to coding issues or neighbor complaints.

Is this problem endemic to Jersey City?

Does it continue to be a problem?

Well since I started Groove on Grove, it’s really been on the up and up. It used to be a fun hobby and now that’s its my income and it’s more serious, I’m looking at the business side. Things are getting better. With Groove on Grove and FM, it’s going to be booking shows for every weekend. It’s a lot and I hate it, but really I love it. 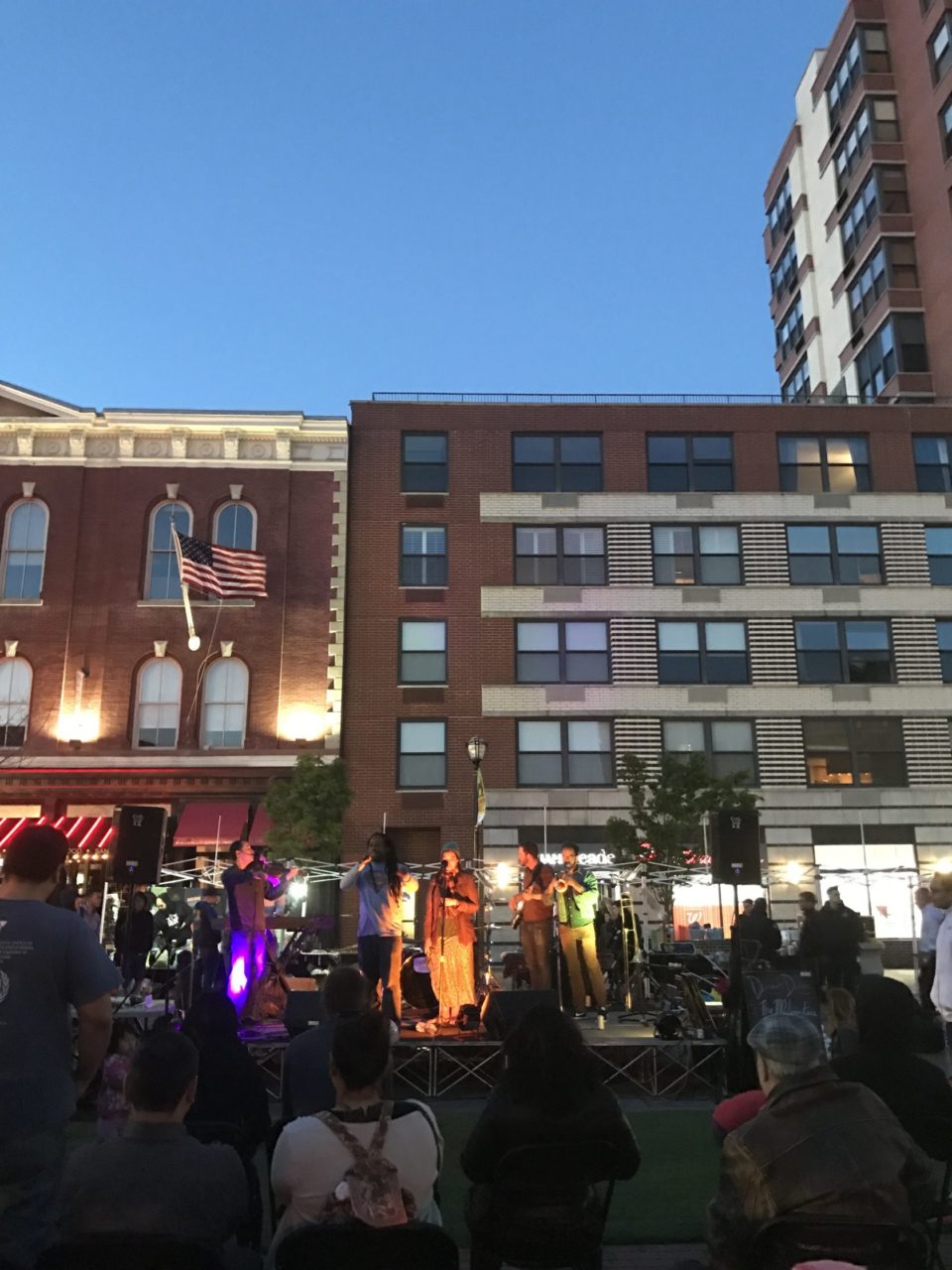 So you’re booking for those venues.

I’m booking for the Harsimus Cemetery, various events and parties, All About Downtown, Lucky 7’s Barbecue, etc. It’s great. And it’s something that really inspires me when people look forward to events in Jersey City and it feels good. And that’s part of why I want more things to open up.

How do you feel about the quality of artists we have in Jersey City?

I feel good. I’m scared we’ve lost some artists at some point, but I feel like we’re able to keep building a cohesive community. Some artists are getting priced out, but some are coming in too and you just don’t know about them. People don’t know that the lead singer of Interpol lived in Jersey City.

Wow, is that true?

Yea! Lots of different bands like that. A lot of musicians just can’t stay downtown, it’s very much changed.There’s so much good stuff but I feel like in a way things fizzled out because we didn’t have just that venue or that spot. Which is fair because being a musician is expensive especially if you’re serious. Not that you have to live on noodles, but there are expenses. Especially if you make $80 on a night then you split that 4 ways and gotta cover your bar tab and your way home.

Agreed. What kind of music are you really enjoying?

That’s a tough question. I’m more overall an indie rock fan. There’s a lot of good musicians here but growing up, I’ve always been a sucker for a female voice. It started with The Go-Go’s and it spiraled from there. But in general, I just enjoy really talented musicians who are just a little crazy.

I think being a musician takes being a little crazy. You know when you say you’re gonna do something and people say what are you crazy? And when it works out you say yea, that’s what it took! Sometimes your rational head will be too much and you hold yourself back. But music has to be able to reach new boundaries sometimes. It’s hard to come up with new music. I don’t know how people do it but they do. 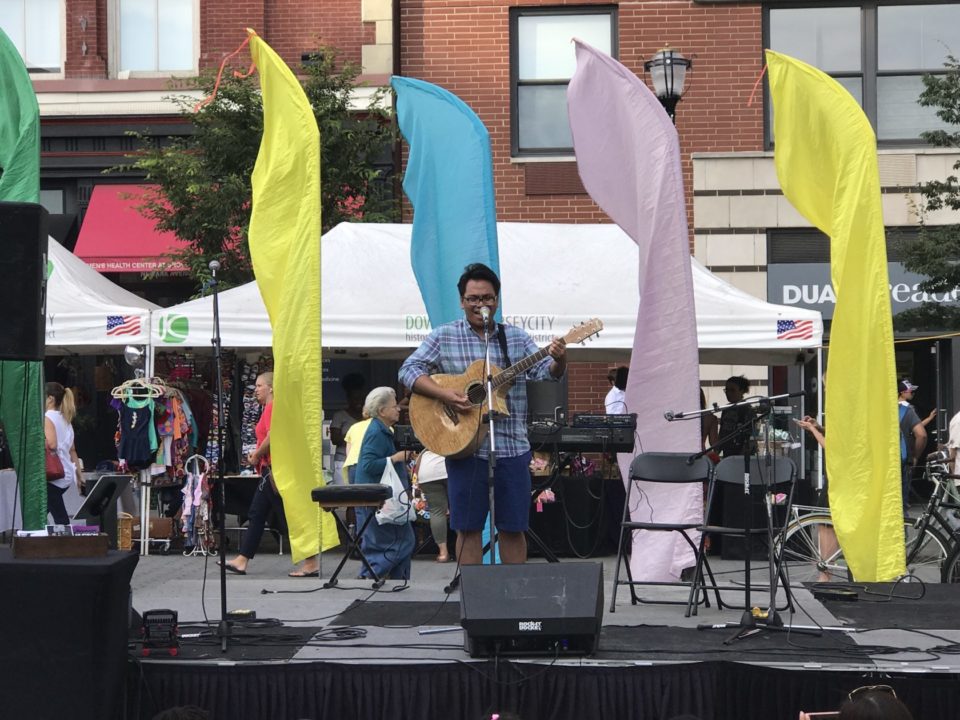 So to wrap up, as people in Jersey City who enjoy live music, what can we do to keep this community thriving?

Definitely come to shows. Don’t be scared to listen to or do something new. Maybe there’s a band at White Eagle Hall you haven’t heard of but hey, it’s right around the corner and tickets are cheap, so why not?

And what do you want to see more of from local musicians?

A problem that comes up with booking is local musicians can find themselves in a bubble. You can tour Jersey City, but you have to find a way to get out.

You have to leave your comfort zone. You have to be willing to push and play new places and meet new people cuz then you meet other musicians in other towns and the community grows. Sometimes you just have to take a chance.

Thanks for sitting down with me, Tony!