A few weeks ago, students at High Tech High School held a silent protest against the school system in light of news that the music teacher Mr. Lawson would be laid off. Despite the students’ best efforts, an 8-0(1) board member vote was in favor of Lawson’s layoff (effective February 1). Lawson was not only a music teacher, but also worked with the arts programs including musical theatre and drama. His layoff raises concerns regarding the future of arts at High Tech High School. 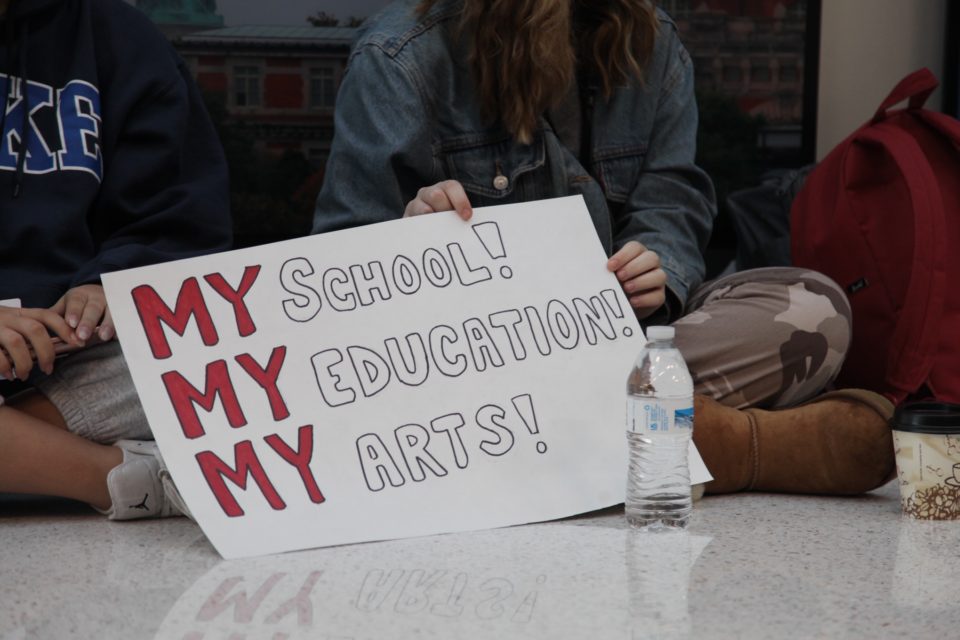 We spoke to the protest organizers in order to understand their side of the situation and to truly highlight the thoughts of the HTHS students who are fighting to protect their arts program.

Nicole Quiboloy covered the event and worked closely with the committee behind the protest. She shares:

I think the passion shown for this man and the program was completely beyond what I had expected for anything. I wouldn’t have believed we had that much power and I am so grateful and proud of everyone who participated. The situation – while it is very common, financial issues, budget cuts – I feel it is so hard to hear when you’re in the position of the teacher. You create memories and you make an impact on the students you teach, and I hope that our protest and movement inspires and empowers those who did lose their jobs or get their programs cut to move forward and know that there is still hope in the future of the kids that they taught and impacted.

Raw. Unedited. Powerful. Today I witnessed the power of 100+ kids silently sitting in a hallway protesting our underfunded Arts program. I have never seen such bravery and strength anywhere else. We stood our ground and fought for what was important to us. We showed our support for our teacher, Mr. Lawson, and our Arts program as much as we could. Though unfortunately, our board of education is more corrupt than we thought. The vote to keep our music theory teacher, Mr. Jacob Lawson, was at 8:1. He was fired. My friends left the boardroom full of tears, anger, and disappointment. But not regret. I am so proud of everyone in that room who fought for our education. I am proud of the parents who showed up and fought for their CHILDREN'S futures. Thank you to everyone who showed their concern and support, including @njdotcom, @news12nj, and @pix11news. We may have lost this battle, but I hope in the coming future of Performing Arts, we win our war. — #WeLoveLawson #SavePerformingArts

The protest was driven by passion and the understanding that teachers mean more to students than the administration may realize. One of the organizers, Gloria Gress, shared how the mission behind the protest came to be.

When it was announced that Lawson was to be terminated in the middle of this school year, that immediately fired up the majority of performing arts students. I think the very next morning, me and my friend Addie Kriegel (a senior dance major) discussed the idea of staging a silent sit-in peaceful protest. It was actually an idea I had last year when the on-going conflict between the administration and performing arts began, but it never really was taken to action then and people weren’t as on board. Lawson’s announced termination was a perfect time to stage it; everyone was now super fired up about the potential loss of one of our best teachers in the music and audio tech program. Although the fight was not something I ever wanted to have to fight for, it was an incredible experience.

Organizing the protest with my friends was very stressful leading up to the day of. When the day came, I can’t describe how empowering it was to find that so many people showed up. It made me so proud to be a part of a community of students who care so much about their arts education and their teacher. The board meeting was incredibly emotional. One by one, students, teachers, and parents poured out their hearts to try and save Lawson. Even though the outcome has been devastating, I’m really proud of everyone and I’m moved at how we all united to work together on one goal: saving our talented, passionate teacher’s job. 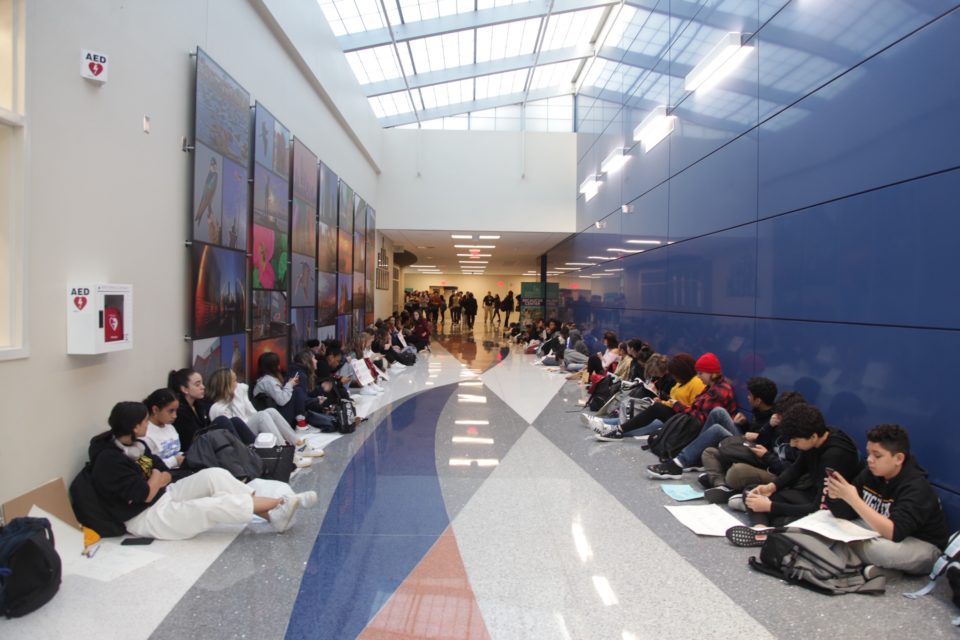 The students of High Tech High School have seen Mr. Lawson’s passion for the arts and find that this is a direct attack on their programs. Molly Dowling mentioned:

High Tech is making a truly terrible decision in firing Mr. Lawson. As someone who is in his class and in his program, I can see that he is incredibly needed to keep my program (music and audio technology) working. To speak for all of performing arts, we just feel very under-appreciated and everything going on right now just feels very repetitive. High Tech is supposed to be a school for kids to express themselves in being able to do what they love throughout their school day and learn how to do it very well, and now it just feels like every other high school in the sense that the arts program is the first to go. The protest was definitely triggered by Mr. Lawson’s termination but it was much bigger than that. We wanted to prove that performing arts isn’t going to stand for the mistreatment that we are being given, but we also wanted to do it in a peaceful way, just to get our point across.

Throughout the protest, students held up signs and one had a link written out on it – bit.ly/HTHSPerfArts. This link leads to an explanation of First Amendment rights for students in school. Considering the fact that students were threatened with arrest during their silent protest, it was clear why this was one of the focal points of the protest, as Molly shared:

We did lots of research before hand and knew our rights, and the fact that we were threatened with arrest was not only terrifying but also so disrespectful and just proved which side the school was on! For sure this fight is not over, and we in the performing arts program will not stop fighting until we get what we deserve. 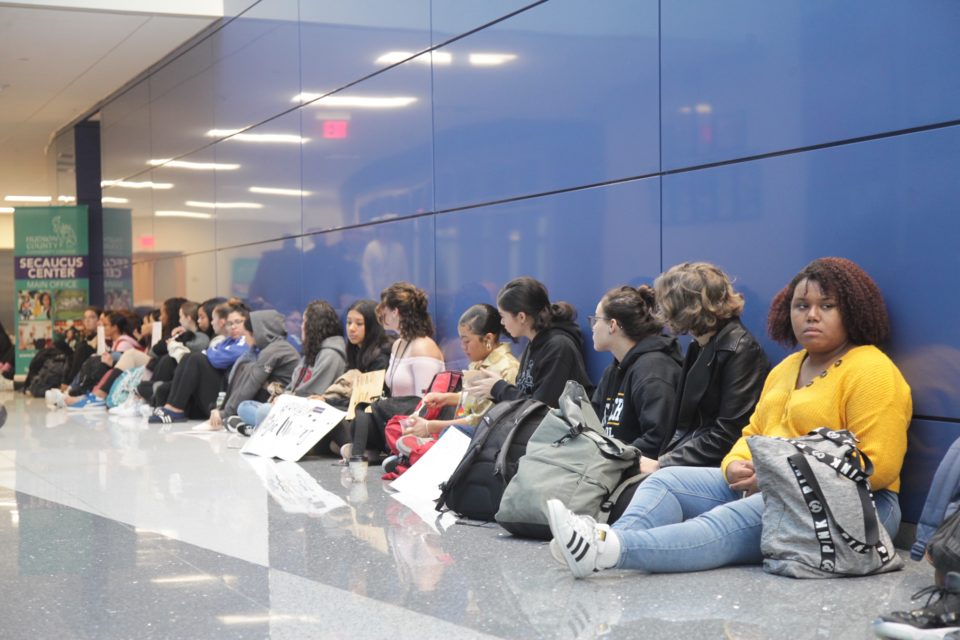 Even Jersey City has seen a great loss in teachers and threats to the arts programs. The possibility of losing arts programs and valuable teachers is a big concern to students, who often feel like their interests are overlooked by administrators for the sake of fitting a budget.

Keep an eye out for any changes to High Tech’s arts, as well as other local school-based news.